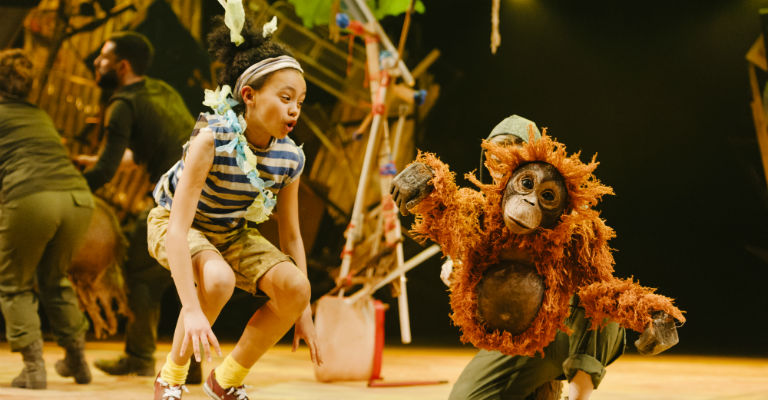 We’ve teamed up with Newcastle Theatre Royal to bring you the amazing chance to be able to win one of THREE pairs of tickets to the opening night of ‘Running Wild’ in May!

Michael Morpurgo’s novel, based on a true story, is brought to life in this award-winning production, which has been described by critics as ‘inspiring’, ‘evocative, ‘imaginative’ and ‘life-affirming’.  Complete with spectacular life-size puppets, Running Wild tells an emotional and moving story of love, loss and loyalty and of living for the moment.

Running Wild is the story is of a girl named Lilly, who, whilst on holiday with her mother in Indonesia, takes an elephant ride.  During the ride, Oona, the elephant, suddenly becomes anxious and runs from the beach deep into the jungle.  With Lilly on her back, they escape moments before the tsunami hits the island.  Miles from civilisation, at first there’s wonder, discovery and tree-top adventures with the orangutans, but, as thoughts turn to her mother left behind on the beach, and wild tigers prowl, and hunger hits, Lilly must now learn to survive the rainforest.  And then the hunters come…

Running at the Theatre Royal between Tuesday 9th and Saturday 13th May, this new production of the tale as been co-directed by Dale Rooks and Timothy Sheader, with puppetry design and direction by Finn Caldwell and Toby Olié, both of whom have worked on ‘War Horse.’ Inspiring and beautiful, it’s set to be a night all the family will be in awe of.

For the chance of being able to win one of three pairs of tickets to see ‘Running Wild’ at Newcastle Theatre Royal at 7.00pm on Tuesday 9th May, simply complete the form below and answering the following question.