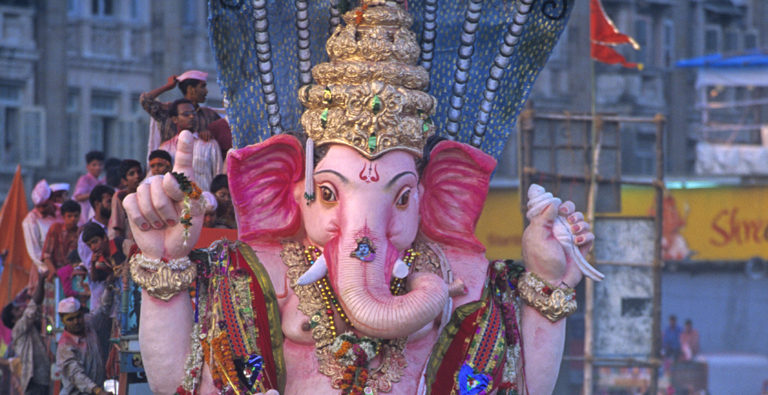 India is a land of gods and the Hinduism that originated in India is its most prominent religion. Among the many deities worshipped by the Hindus, Lord Ganesha, the elephant-headed god, holds pride of place in the hearts of people.

The celebration of Ganesha takes place in the month of Bhadrapada (August – September) when thousands of clay statues and huge images of Ganesha are worshipped in households. The festival culminates with the immersion of Ganesha images and statues in lakes, rivers and the sea. The statues are accompanied by worshippers in a huge chanting procession.

The object is a 13th century schist sculpture of Ganesha. At 119cm tall, this Ganesha depicts many of the major attributes of the popular Hindu god; this Ganesha is a corpulent figure and is shown holding a bowl of his favourite sweets whilst at the base of his lotus pedestal crouches his rat ‘vahana’ or vehicle. His anklets are of snakes, as is the sacred thread wound across his chest. The arch within which he stands is of a typical Indian decorative type with a lion mask (‘kirttimukha’) at the top, and aquatic monsters (‘makaras’) at each end.

The Ganesha sculpture will be displayed alongside complimentary Gouache paintings and woodcut prints that depict Ganesh in traditional scenes. Celebrating Ganesha is touring to seven venues across the UK and each of Museum will highlight connections with their own collections.