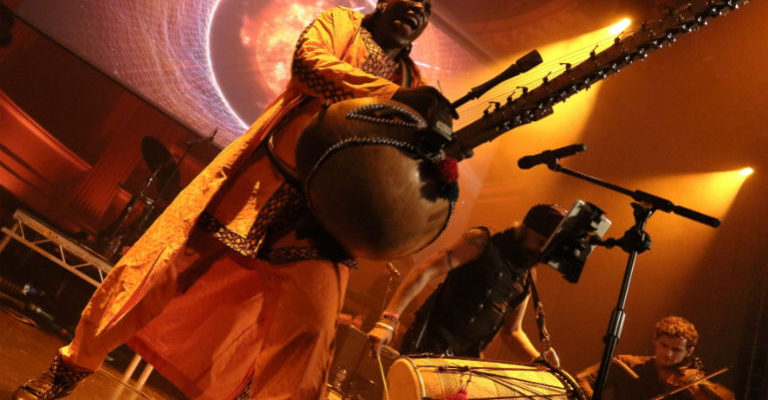 Formed by Grammy-nominated musician and record producer Simon Emmerson, Afro Celt Sound System are a European and African based collective who’ve been a ground-breaking force in music ever since they started.

Their acclaimed live performances are energetic and captivating and innovatively combine folk traditions of different cultures to breath-taking effect. They won Best Group in the 2017 Songlines Music Awards.

Simon Emmerson is joined by long-term members’ vocalist, kora and balafon player N’Faly Kouyaté and Dhol drummer Johnny Kalsi. Their live show features contributions from a host of other outstanding musicians including Armagh-born vocalist and flautist Rioghnach Connolly and bodhrán player and percussionist Robbie Harris. They will also be joined by special guests Peter Tickell on fiddle, Ged Lynch on drums, Simon Richmond on keyboards and Lottie Cullen on pipes and whistle.

With sales now topping one and a half million albums and two Grammy nominations to date, Afro Celt Sound System recently celebrated their 20th Anniversary. The band are currently in the studio writing and recording a much-anticipated follow-up to 2016’s ‘The Source’ which Roots described as “a colossus of an album”.

“Bigger, better and bolder than ever before” Songlines