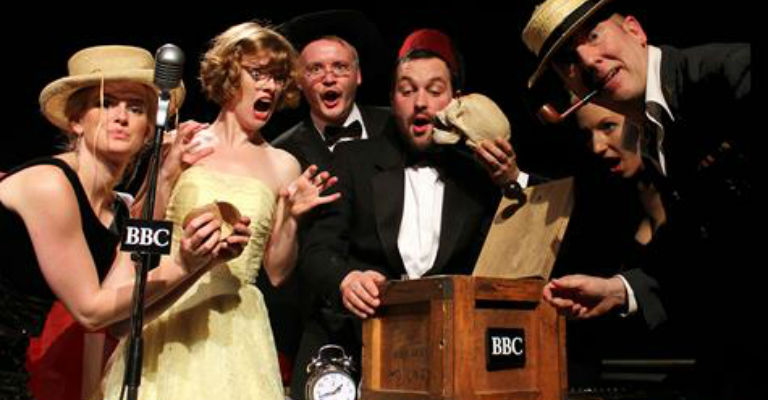 In this programme Stephen Noakes presents a special one off “Arts Hole” omnibus edition of the Berwick Broadcasting Corporation featuring all your favourites from years gone by in “The Golden Age of Wireless”.

BBC performers with special guest George Formby re-create all those magical moments of the airwaves including “The Romance of Helen Simms”, “The Only Way is Eastcliffe”, Peter Meliah’s “Thought for the Day”, some of your favourite commercials of time gone by such as “Orangicide”, “Gilhooloies”  and “Fazackerley’s Hats”, and of course the world’s longest running radio soap “The Sticks”.

A humorous look back at the golden age of wireless entertainment from a time of war, austerity, rationing and rampant misogyny! The BBC recreate the atmosphere of a 1940s radio show complete with incredible sound effects.

Yes, it will be more fun than you could ever have in an Andersen Shelter, so leave your Bakelite wireless at home, ladies rub some Bisto on your legs and gentlemen take the moth balls out of your De-Mob suit and join in the fun!