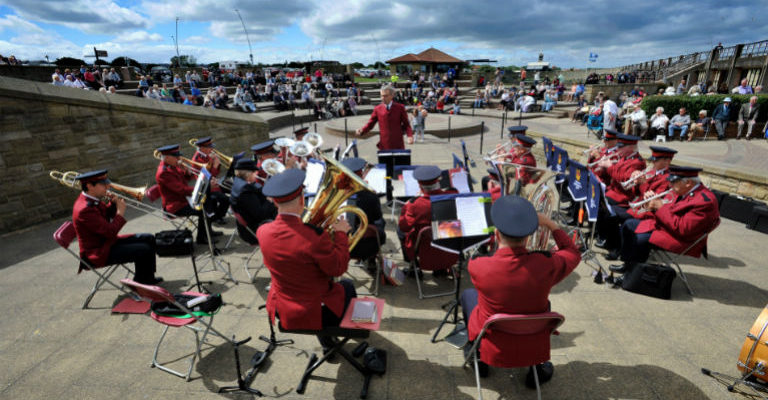 Throughout June, July and August, South Shields Amphitheatre will play host to a different brass band each Sunday, as the popular family event returns.

The brass band programme forms part of the three month festival organised by South Tyneside Council to bring a summer of live music and entertainment to the town.

Kicking-off this year’s programme will be South Shields’ own Westoe Brass Band on Sunday 3 June, while Craghead Colliery Band will be the stars of the show a week later.

These will be followed by a different band each Sunday, with musicians travelling in from various parts of the region including Sunderland, Gateshead and County Durham.

The final show will feature the NASUWT band on Sunday 26 August as the 2018 festival heads into its final week.

The brass band performances have become a regular and much-loved fixture in the summer events programme, and provide a traditional musical backdrop for a day at the coast.

They join a host of musical acts heading to South Shields this year, in a packed timetable which features the Sunday concert series along with other live music concerts in the Amphitheatre.

Councillor Alan Kerr, Deputy Leader of South Tyneside Council with responsibility for Culture and Leisure, is a big fan of the brass entertainment.

“For a lot of people, the sound of a brass band is something very special and very much part of our heritage here in the North East,” he said.

“I don’t think there is any better sound than the music of one of these bands, particularly at outdoor events like the South Tyneside Festival.

“It is something that really lifts the mood and spirit of everyone, no matter what their age and it is the perfect accompaniment to a summer stroll along the beach and coastline.

“I’m very excited about this year’s festival. There is definitely something for everyone there, and with more shows and concerts to be announced over the next few weeks, we are all looking forward to a fantastic summer.”

The Brass Bands at the Amphitheatre programme is brought by South Tyneside Council with support from Minchella & Co and BBC Newcastle.