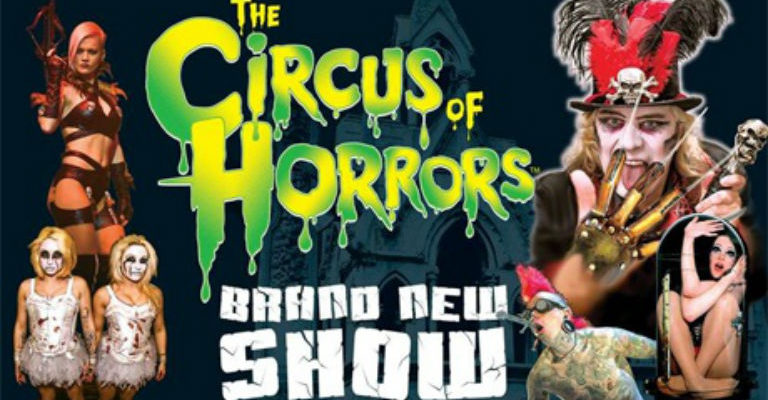 Imagine a fangtastic Rock Show with amazing light effects & set combined with an amalgamation of bizarre, daredevil & astounding Circus acts, accompanied by a rock n roll soundscape of mainly original songs & performed with a forked tongue firmly in each cheek.

If Quentin Tarantino had directed Cirque Due Soleil then you would be only half way there.

Circus of Horrors is touring throughout the world with a brand new show, featuring unbelievable sword swallowers, hairculian women swinging around the auditorium from her hair, demon dwarfs, strong man, whirlwind acrobats, flaming limbo, sensational sinister aerialists, knife throwing, cross & long bow wielding Bond like Diva’s, twisted contortion & lots, lots more in this rock & roller coaster of a show that is now celebrating 24 years on the road, and all performed to a live rock soundscape

‘You have to go & see this if, one day something will go wrong & you will be able to say I was there’
Graham Norton.

‘I loved it’
Simon Cowell.

In addition to the 100 theatre’s the Circus of Horrors performs in each year it also appears in Festivals throughout the World including Download, Reading, Leeds, Isle of White, T in the Park etc in the UK,  Fuji Rock Festival in Japan (twice), Wacken festival in Germany plus shows in Chile, Uruguay, Holland, Belgium, Argentina, France, Italy, Ireland, Finland, Hong Kong and Moscow where it created history by becoming  the 1st UK Circus ever to perform in Russia. And an astounding 10 nights in London’s O2.

It is not the 1st time however that The Circus of Horrors has created history, it became the only circus ever to reach the finals of Britons Got Talent and the 1st Circus to perform in London’s West End for over 100 years, & the only Circus to perform in a single venue in London (The Roundhouse) for an astounding 24 weeks, (previous record was 17 weeks).

In addition to BGT our appearances on various other TV shows have turned what set out as a cult show into a household name, without compromise – taking the extreme to the mainstream, Its TV credits now also boast The X Factor, The Slammer, Daybreak, Fairground Attractions, Who wants to be a Millionaire, Body Shockers, Fake Reaction, This Morning, Ant & Dec, The One Show  & A Royal Command Performance.

The Circus of Horrors started it’s gruesome begging’s at the 1995 Glastonbury Festival and became an instant hit, touring all over the world from Chile to Chatham, Argentina to Aberdeen, Japan to Jersey including festival appearances with Alice Cooper, Eminem, Motley Crue, Oasis, Iron Maiden, The Manic St Preachers, Foo Fighters, Rammstien, Guns & Roses, Marilyn Manson, Ozzy Osbourne and many more.

‘The Circus of Horrors completely WOWED the audience’
The Daily Mail.

‘A Bloody Great Night Out’
The Times

‘Bloody Good Fun – Barnum Would be proud’
Time Out

Age advisory 16+. The Circus of Horrors contains some nudity and language of an adult nature and is not suitable for children.