DAME VERA PAYS TRIBUTE TO THE WOMEN THAT WON THE VOTE 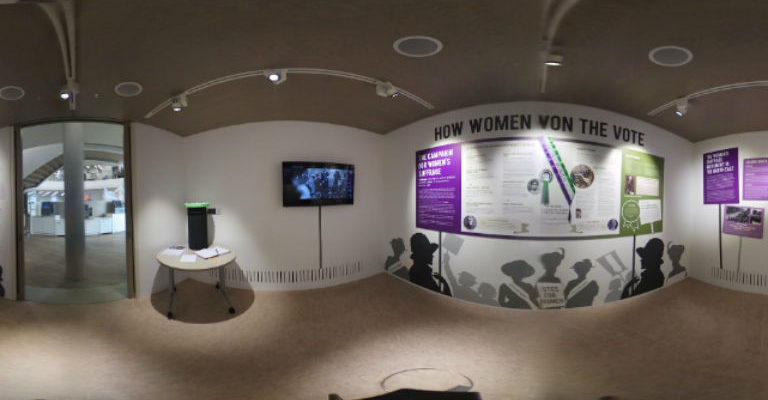 We have come a long way, but there is still a long way to go.

That was the message from Dame Vera Baird QC as she unveiled a new exhibition detailing the part played by North East women in the suffrage movement.

How Women Won the Vote, at The Word, National Centre for the Written Word, South Shields, celebrates the centenary of some women being given the right to vote.

The free exhibition, which will run until 3 May and is supported by Port of Tyne, examines the North East’s history of women’s suffrage and women in politics.

And as she officially declared it open (on Friday 23 March), Dame Vera, Police and Crime Commissioner for Northumbria, paid tribute to the women who drove the movement for suffrage.

Detailing the brutal punishments often meted out to suffragettes, she told of Tyneside’s Kathleen Brown.

Force fed after going on hunger strike, Kathleen later wrote, “the horror was more than I could describe. And, as the doctor left, he gave me a slap on the cheek to express his contempt.”

“What they achieved a century ago was in many ways a small change,” said Dame Vera, “but it signalled a profound shift in attitude. These women played a great part in changing the agenda.”

Along with clips and songs from both Mary Poppins (1964) and Suffragette (2015), the exhibition features an unofficial ballot box, where visitors can cast their vote from a list of women featured in the exhibition.

“And if there is one message women should take away from this exhibition,” said Dame Vera, “it is vote, vote, vote.”

Tania Robinson, Head of Marketing and Culture at The Word, National Centre for the Written Word, added: “Very often the role of ordinary working women is forgotten in the story of women’s suffrage, yet here in the North East they really did play a key role in the movement.”

Speaking at the exhibition opening, Susan Wear, Director of Corporate Affairs at Port of Tyne, said: “It’s really inspirational to learn about the role played by North East women and fitting that their efforts are being recognised here at The Word.”