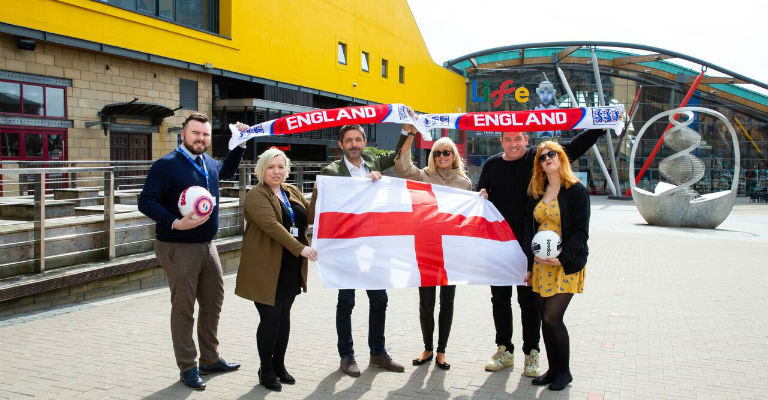 With June’s 2018 World Cup kick-off in Russia fast approaching, the organisers of the celebrated Live From Times Square music event have confirmed it will host a giant outdoor fan zone on the site of its Newcastle based festival.

World Cup 2018 Live From Times Square – at the Centre for Life – will see all 52 games of the tournament broadcast set against the backdrop of a giant screen and an artificial astroturf.

The site can hold up to 2,500 people and is set to be the region’s largest beer garden this summer and the ultimate facility of its kind for football-mad fans.

As a special treat for football mad fans, England and Newcastle United legend Peter Beardsley will also be heading to Times Square before England’s first game on 18th June against Tunisia, where he will talk about his experiences in the famous Italia 90 tournament.

Kicking off with Russia’s opening game of the tournament on Thursday 14 June at the Luzhniki Stadium in Moscow against Saudi Arabia, and ending in the final on 15th July, World Cup 2018 Live From Times Square will feature all of England’s group games including matches against Tunisia (18th June), Panama (24th June) and Belgium (28th June).

Speaking about its latest live offering, Steve Davis, of SSD Concerts, said: “Everybody knows us from our live music events in the city but trust us, we’re just as mad for football as we are for great bands.

“This has taken a lot of planning, but we’re thrilled to have the go ahead and give people the chance to watch football outdoors, savour an amazing atmosphere and hopefully see England progress to their latter stages of the World Cup.

“We can’t promise that England will do well, that’s down to Gareth Southgate and the players, but we can promise a purpose-built site of the likes that has never been seen before in Newcastle. Come on England!”

As well as featuring all of the 2018 World Cup games, the purpose-built garden will feature an artificial turf for safe standing and seating while people enjoy the games.

On certain days, it will also feature family films along with craft ales, delicious food from some of the region’s most revered street food vendors as well as official merchandise stalls where fans can buy retro football tops, scarfs, klaxons and flags to add to the atmosphere and get in on the action.

Entry to World Cup 2018 Live From Times Square will be free but tables can be reserved for a nominal fee which will include pre-ordered beer and food.

“Sponsoring such a major summer attraction like this is a great opportunity to promote the fun and social side of our business, which is a big part of our culture and something our colleagues really enjoy. We hope everyone who makes use of the fan zone has a fantastic time.”

Metro Radio will be promoting the event as Station Director Dom Munnelly explained: “We’ve worked successfully with SSD Concerts on many of their previous events and we expect the zone to have huge appeal amongst our listeners and be the place to be to watch live world cup football this summer.”