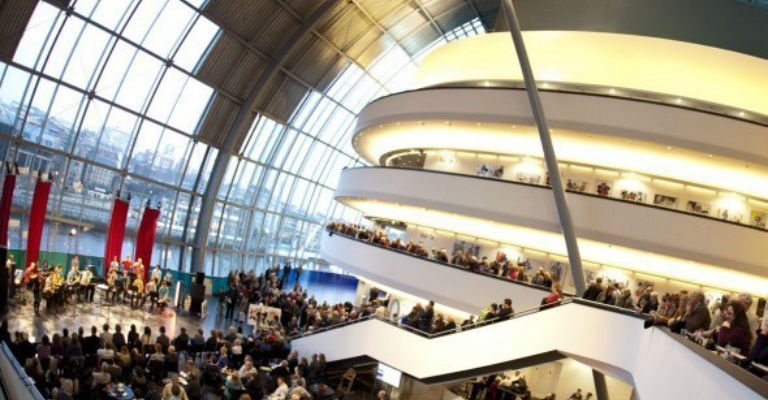 The global reach of jazz and the sheer range of music in today’s jazz scene are the threads that run through Gateshead International Jazz Festival 2017.

The festival presents a dynamic mix of artists from Cuba, South Africa, Cameroon and throughout Europe alongside diversely talented artists from the UK and USA. Whilst the classic jazz tradition and the swinging sounds of the jazz big band remains at the heart of the weekend, next year’s festival also reflects the way that new generations of artists are telling the story of an ever-changing jazz landscape. The festival, the UK’s biggest held under one roof, fills four stages at Sage Gateshead from Friday 31 March to Sunday 2 April 2017. Tickets go on sale on Friday 2 December.

Clare Teal and her 17 piece Hollywood Orchestra (led by Guy Barker) open next year’s festival and mark the centenary of the peerless Ella Fitzgerald and Lena Horne, alongside Nina Simone, Nancy Wilson and Peggy Lee, in a programme of timeless songs from the standard repertoire. The story of a basement bar in Soho that became one of the world’s most famous jazz venues is told by the Ronnie Scott’s All Stars, with anecdote, visuals and live band.

Topping the bill on Saturday night are Mercury Award-nominated GoGo Penguin and Shobaleader One (the live project from Squarepusher aka Tom Jenkinson). They play a double bill that places jazz in a brave new world of electronica and groove. Miles Mosley has been described as the “Jimi Hendrix of the upright bass” as anyone who’s seen his show-stopping performances as part of the Kamasi Washington band will testify. Neil Cowley is an original talent whose series of trio albums are remarkable for their individual approach to the jazz piano trio format. His new album, Spacebound Apes, is no exception.

The festival’s third headline concert, Jazz Africa/Jazz Cuba, charts a jazz journey from South and West Africa to the latin jazz of Cuba. The festival always includes great performers from across Europe and next year is no exception. The festival welcomes celebrated Polish trumpeter Tomasz Stańko, with an international quartet that includes Finnish pianist Alexi Tuomarila alongside a stellar US rhythm pairing of bassist Reuben Rogers and drummer Gerald Cleaver. The festival also welcomes Amsterdam’s ten-strong ICP (Instant Composers Pool) Orchestra. They will be paying tribute to the group’s co-founder, the pianist Misha Mengelberg, now too frail to perform, through a film and exhibition in his honour, as well as through the spirit of a landmark jazz ensemble.

The 2017 festival features a strong line-up of emerging jazz stars. BBC New Generation Artist and award-winning trumpeter/composer Laura Jurd is, alongside GoGo Penguin, one of the British jazz stories of recent years. She returns to Sage Gateshead with her quartet Dinosaur in a concert also featuring Norwegian tuba virtuoso and composer Daniel Herskedal and his trio. Described recently as ‘a significant new voice in British Jazz’ pianist Paul Edis leads the regional youth jazz ensemble Jambone in a program of new music composed by special guests Matt Anderson and Zoe Gilby.

The ever popular free stage on the Concourse returns where on Saturday BBC Radio 3 will present a selection of national and international jazz artists recorded for a future edition of Jazz Line Up and on Sunday Jazz North East will present their choice of artists from the North and further afield.

Families can enjoy an energetic whistle-stop journey through jazz history with North East singer Zoe Gilby and her band and Amsterdam’s Instant Composers Pool present a family friendly edition of their festival concert.

Plus there will be festival workshops, talks, film, exhibitions, late night sessions and clubs and much more still to be announced. Keep an eye on the website for further updates.

With all events taking place under one roof it couldn’t be easier to move between concerts and try something new. Bookers can take advantage of the Jazz Multibuy – the more concerts booked across the weekend the more money saved.