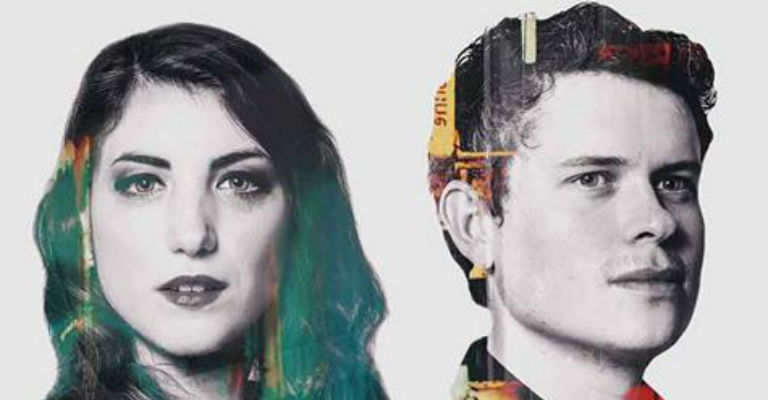 Nominated three times at the BBC Radio 2 Folk Awards, Katriona Gilmore (fiddle, mandolin) and Jamie Roberts (guitar) met while studying at Leeds College of Music and released their debut album in 2008. Since then, the duo have toured Canada and mainland Europe, played some of the UK’s biggest acoustic festivals, toured with folk rock legends Fairport Convention, and won countless accolades for their genre-spanning work.

“Conflict is universal – everyone, everywhere, experiences it every day, in its smallest forms” says Katriona. “We liked the idea of being tour guides through a minefield of different decisions and drama.”

“And good tour guides are passionate about what they’re showing you” adds Jamie. “They’re not detached from the subject. It’s personal – it’s people and stories. That’s the starting point for every song.”

Katriona Gilmore grew up in Knebworth, Hertfordshire, learned violin at school and started playing local folk clubs with her guitarist father at the age of 14. She joined folk pop sensations Tiny Tin Lady in 2006, and in 2011 was invited to be part of a new lineup of The Albion Band. Katriona has featured on many acclaimed albums as a session musician and has appeared onstage with such diverse acts as The Troggs, Kim Richey and Matt Berry.

Jamie Roberts was brought up in Barnsley, South Yorkshire in a musical family – his sister Kathryn Roberts is a well-respected singer on the UK folk scene. Jamie joined young English traditionalists Kerfuffle in 2007 and more recently formed The Dovetail Trio with Rosie Hood and Matt Quinn. Alongside his regular projects, he has performed with Nancy Kerr’s Sweet Visitor Band and  Blackbeard’s Tea Party amongst others.