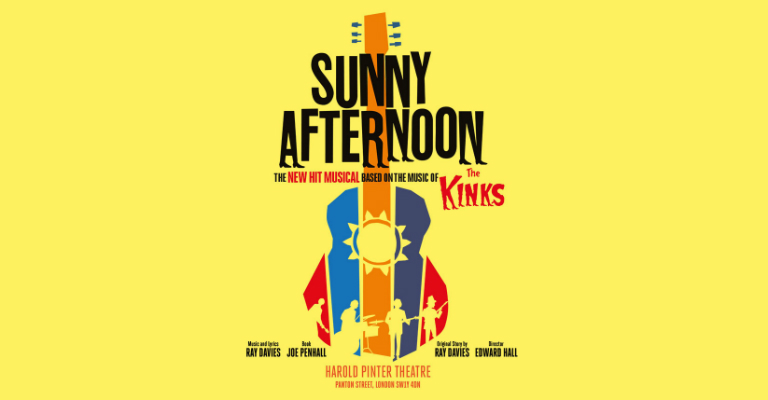 Winner of the 2015 Olivier Award for Best New Musical, Sunny Afternoon is an irresistible musical with slick theatricality and ingenious storytelling at its heart. It tells the captivating tale of how one of Britain’s greatest bands, The Kinks, rose to stardom.

Step into swinging 60s Britain and discover how The Kinks found their definitive sound that rocked a nation and influenced generations. Feel the euphoric highs and experience the power of a live Kinks performance as we witness the band’s beginnings, their barnstorming debut on Top of the Pops, their infamous American tour and their triumphant comeback.

Featuring the iconic hits You Really Got Me, Waterloo Sunset, Dedicated Follower of Fashion, All Day and All of the Night, Lola, Sunny Afternoon and many more, this production fizzes with energy, and is a fresh new ‘Great British Musical’ (The Times) that will make your spirits soar.

With music and lyrics by Ray Davies (Olivier Award for Outstanding Achievement in Music), a new book by Joe Penhall and direction by Edward Hall, Sunny Afternoon’s faultless musicianship and brilliant songs come together for a moving portrayal of The Kinks’ amazing journey during the youthful, rebellious 1960s. Book now!

***** ‘A blazing triumph. I swear you’ll get goosebumps’
Telegraph

***** ‘A belter! Funny, stylish, well-performed – It has everything The Kinks had’
Daily Mail

**** ‘Fans of The Kinks will find this new musical irresistible. And anyone who doesn’t know their work will be bowled over by the sheer quality of the songs’
Evening Standard
***** ‘Stormingly successful. I defy anyone to resist it.’
Financial Times
**** ‘This is a great, very British musical about a great, very British band’
The Times

PG Recommended and strong language throughout