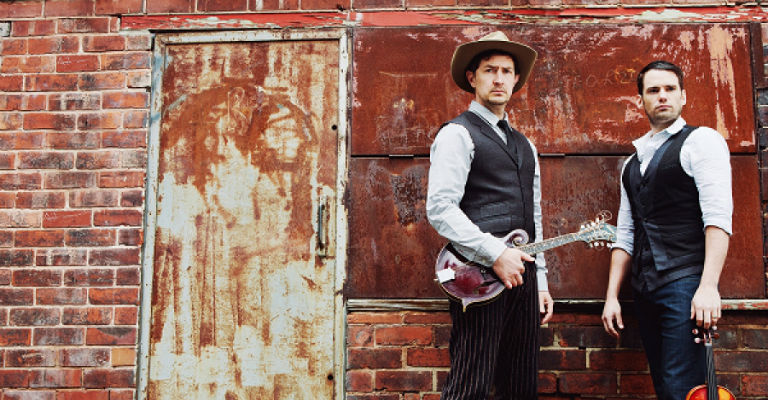 The James Brothers are not really outlaws, neither are they brothers and only one of them is called James.

They come from the lands down under – Australia and New Zealand to be precise; lands in which the traditional songs and tunes of the British Isles have evolved their own unique characteristics, like musical marsupials. And it’s these songs and tunes, and several of their own making, that The James Brothers have united to play.

The James Brother who is called James is Sydney-born James Fagan – best known as one half of Nancy Kerr & James Fagan(musically and maritally), but also spotted playing guitar and bouzouki in The Cara Dillon Band, the live circus that is Bellowhead and with his parents and sister as The Fagans, where his folk career began (in a decade which has only just become fashionable).

The James Brother who isn’t called James is Jamie McClennan – a Kiwi who found himself in a duo with Scotland’s BBC-award-winningEmily Smith (whom he also married) having chosen not to follow his first bandmates to Ireland, where they formed the much celebrated Gráda. Jamie has been sighted on fiddle, whistle and guitar next to the likes of Sharon Shannon, Beth Nielson Chapman, Jerry Douglasand his mum.  He also likes to run barefoot, but that’s his own business.

While both men are quick to point out that their work with their wives is still the primary passion, The James Brothers allows them to be centre stage – playing the music of their roots and telling jokes without fear of being told off.

For Fagan and McClennan this is about bringing their distinct Antipodean-steeped folk to a new audience, with songs and tunes brought to life by a fraternal bond between two very silly, but captivatingly gifted musicians.