Great songs, wonderful sets and a flying wicked queen – the only thing green about this show will be the envy of people who don’t go and see it.

Posted on December 27th 2017 by Whats on Northeast 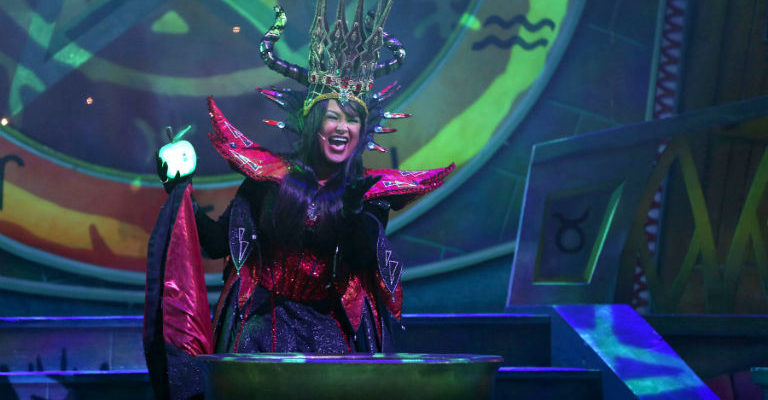 It’s funny how some traditions live long and strong, year after year.  Take Panto season, which is here again (oh yes it is); the usually demure and sedate theatre-going audiences are suddenly turned into, and accompanied by, screaming kids sporting all manner of flashing appendages; the knowing whispers when an actor misses a line are swapped for roars of laugher both on & off the stage and the 4th wall is torn down and ceremoniously trampled on as young and old are encouraged to great the cast with cheers, boos, chants and giggles.  That tradition is constantly reinforced by the production company Qdos who bring glitz, glamour, sparkles and no shortage of special effects back to Darlington.

This years offering at the newly reopened Hippodrome is the first major production to grace the refurbished theatre and give the seats, sound system and stage hands a really good workout.  With Snow White the chosen story, the traditional formula for panto is very well observed; plenty of goading the younger audience into shouts & screams, the singling out of a few teachers to make the next school dinner a constant source of amusement and of course, a liberal smattering of double entendres to ensure the adults can laugh along, tho not always at the reasons the kids believe.

On a stage of many stars Zoe Birkett (born like yours truly in Consett) dominates every scene she’s in – its been a long time since we had to knowingly share ‘our’ Zoe with the rest of the UK but each time she comes home she brings such energy, fun and enthusiasm that it’s like recharging the pride batteries.  For this performance as the Wicked Queen she has the opportunity to give us a full appreciation of all her talents, ending the 1st act with her rendition of Queen of the Night which sounded and felt like Tina Turner in the Who musical Tommy (bit of an odd reference, but anyone who has watched the Ken Russell rock opera will surely appreciate the similarities) leaving you wondering how can someone soo good be soo deliciously bad ?

Continuing the time honoured traditions, the comedy double act of Eric Potts (a madcap dame to rival Christopher Biggins as Mrs Norah Crumble with an extensive range in baking ) and Liam Mellor (the daft as a brush Muddles) guarantee bucketfulls of slapstick comedy, laugh out loud routines and just plain old ‘forget your inhibitions’ silliness.  Bizarrely, they even occasionally manage to out-funny stand-up superstar Patrick Monahan, the not so evil queens henchman (tho if you want to get an extra session of Patrick then check out Bishop Auckland Town Hall comedy night on Fri 22nd).  The funniest (and yet possibly scariest for the 3 guys) scene must be the discussion around how best to prepare the game bird for the royal dinner – I won’t spoil anything here, but the script writers certainly knew how to ensure the cast didn’t dare have a nip of something before a show.

The starring role of Prince Lee is played admirably by Lee Ryan, with plenty of energy and a great voice, he quickly identified with the dabbing youngsters in the audience (and a few of their mums too).  Full of very cleverly written songs (especially the ‘Darlo’ opening number ) and plenty of in jokes about the town and our neighbours, this had a very local feel which, with along with Zoe et al, ensured that whilst the deco might be new and the layout slightly different, the feel is still very familiar.

Panto is a very English form of theatre – many of my foreign friends just don’t know how to approach one and consequently they struggle to accept the ‘anarchy’ that ensues, but that’s what this tradition is all about – forget the quintessential British reservedness and grant yourself one evening of self indulgent silliness – if laughter is the best medicine then Darlington Hippodrome audiences will be the healthiest in all the land.