Jack and the Beanstalk @ Gala Theatre

Posted on December 5th 2016 by indigo 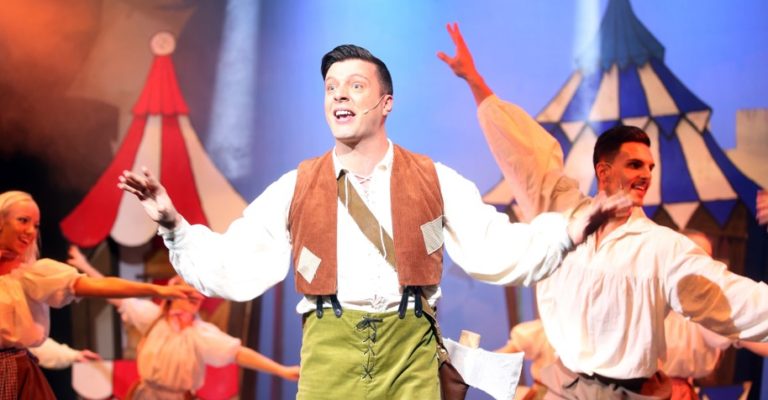 In what now seems like a tradition for our family, the four of us visited the Gala Theatre on Saturday for their annual Christmas panto, which this year is Jack and the Beanstalk. Given how much we enjoyed last year’s performance, we had high hopes for this year and, as expected, it did not disappoint.

Once again, the formidable writing and directing duo that is Neil Armstrong, who stars as the nefarious Fleshcreep and Paul Hartley, who regales in his Silly Simon role, managed to refresh an already well-loved story and make it funny and engaging whilst also setting the story in the local town of Spennymoor. Of course, with the local setting, there were some tongue-in-cheek jokes that people from these parts found amusing. And, of course keeping with the local theme, the main man himself, Jack, was played by a North East native, Jamie Brown. He was a new face for us though, and he did a good job.

The dame of the show was Jack’s mother, Dame Trott, played again by the hilarious Paul Dunn. We recognised him from last year’s Cinderella, where he played the ugly sister Sweaty and my kids just didn’t stop talking about him and his antics. He epitomises the panto dame role so fantastically that he’s a standout character for us. But this year Dame Trott was looking for a husband, and one unlikely fella sat up front in the audience had the unlucky job of being the butt of all jokes. ‘Graham’ was a good sport though and took all of the mischief by Dame Trott in good stead, which the audience found funny. There wasn’t the usual two-man panto horse, but instead Milkshake the cow was upright on two legs and was the precursor to the magic beans and milk sloshing fun in the castle. As usual, the troupe of supporting dancers and panto babes contributed wonderfully to the show and little Daisy Dobson of Dobson’s Dairy stole the hearts of the audience with her cute narrative. One particular part of the dancing, for me, stole the show and that was when two dancing couples were spot-lit behind a white screen whilst Jack and Jilliana were on stage. It just added a pretty touch to the story without the dancers actually being on stage; so very clever if you ask me.

The sets were their usual vibrant, colourful selves that we’re used to, but my kids thought Olaf the Giant, towards the end of the show, was amazing. I won’t spoil it, but descending the beanstalk was brilliant! Even Fleshcreep had pyrotechnics for his evil magic, but goodness prevailed as Moonflower the Fairy and her light-up wand fought the foul Fleshcreep for the Amazing Amulet of Auckland. Fleshcreep had stolen the amulet from the fairies and it fuelled his villainous ways, but Moonflower, with help from Jack, Silly Simon and her gaggle of fairies fought hard against the evil entity Fleshcreep. In the end, Spennymoor was serene once again, and Jack and his Princess Jilliana lived happily ever after.

There were some twists along the way, which I won’t spoil, but you certainly won’t need any magic beans to enjoy the show and aside from all of the garden hose, spray snow and milkshake flying around (poor Graham!) it was a super fun way to start our family’s festive season off with a proverbial bang. For a local production, in a great venue, the Gala’s pantos have yet to disappoint us, and with such a good proven formula for these productions, we’ll be coming back every year at the start of the festive season to watch them.

Jack and the Beanstalk runs at the Gala Theatre & Cinema in Durham until 7th January 2017.