Posted on July 2nd 2018 by Whats on Northeast 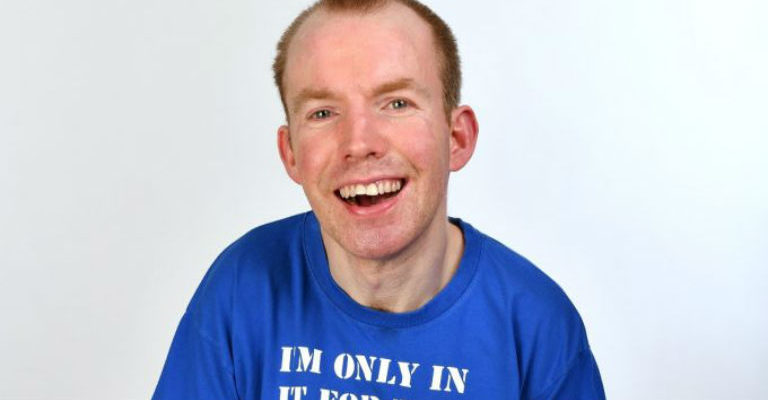 Following the unprecedented success of his appearance on the final of Britain’s Got Talent 2018, BBC New Comedy Award winner and star and writer of BBC Radio 4’s comedy series, Ability, Lee Ridley (aka Lost Voice Guy) is setting out on a tour of the UK. Tyne Theatre and Opera House are thrilled to welcome him to their stage on Sunday 17th February.

He may not be able to talk but he definitely has something to say and his comedy will leave you speechless.
PRESS RELEASE
Lee is the first stand-up comedian to use a communication aid and made his first stand-up appearance in February 2012. He has performed in some of the UK’s most popular comedy venues as well as in solo shows at festivals including the Edinburgh Fringe, the Brighton Fringe, Glasgow International Comedy Festival, Leicester Comedy Festival, Nottingham Comedy Festival and Liverpool Comedy Festival.

He won the BBC New Comedy Award in 2014 and his TV and Radio credits have included The One Show (BBC One), Voice Of The People (BBC Three), BBC At The Edinburgh Festivals (BBC iPlayer), Ability (Radio 4) and, of course, Britain’s Got Talent (ITV)

Theatre Director Joanne Johnson says: “We’re all so excited that Lost Voice Guy is bringing his show to our stage in 2019! Lee has performed here before but as part of other shows such as Smile for Life’s, Smile for a Night variety show, so this will be his first solo show at Tyne Theatre. We were all rooting for him on Britain’s Got Talent, so to see him actually win was incredible, and very much deserved. We expect this show to be very popular so recommend booking your tickets as soon as they go on sale!”