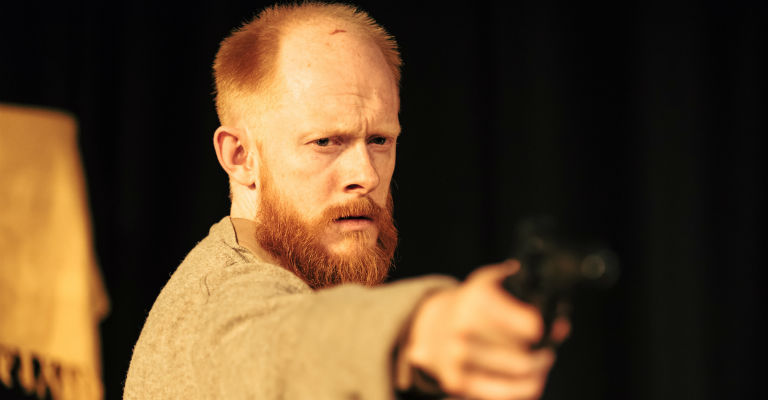 Inspired by the life of his grandfather and fresh from its critically acclaimed premiere at the Edinburgh Festival Fringe, writer Lisle Turner and Open Sky bring ‘Scorched’ to Arts Centre Washington to present the extraordinary story of a World War II veteran drags his mind into the past.

In 1991, Jack is a North East legend, a decorated veteran of Tobruk who reigns from the comfort of his armchair. He’s led a remarkable life, being a former river warden, boxer, horse whisperer, boat builder and even a bit of a charmer. But, triggered by the start of Operation Desert Storm in the present day, the tattoos that cover his body keep dragging him back to the Sahara desert in 1941, where he chased a German prisoner of war for two days across the scorching sands. In further flashbacks we learn more about Jack’s childhood, his former glories and the brutal realities of war.

Speaking of the play, Turner said in a statement: “My grandfather wouldn’t talk about the war and how it affected him for fifty years. Then when dementia struck in his late eighties shocking stories started to pour out. At the same time my school friends were being sent to fight in the Gulf. Those desert wars continue to this day. Society is quick to forget what war does to soldiers and their families. My grandfather’s own memories betrayed him in the end. I want him, the things he did and saw and sacrificed, to be remembered.”

As such, Open Sky uses ‘Scorched’ as a way of exploring the language that veterans use – or often don’t use – to describe their experiences of war, as well as the deeply debilitating effects of dementia on memory, self-determination, issues surrounding what it is to be a “man” and even the loss of the self.

While it may centre on the crusade of just one man (vividly portrayed using physical theatre, projection and a lot of sand), the way that ‘Scorched’ uses its design and clever script to move elegantly between the past and present will capture the imagination. It’ll have every audience member thinking about the trauma of war and the pain of living with dementia, and will stay with you like a tattoo on the mind.

Scorched by Open Sky from Turtle Key Arts on Vimeo.