Posted on February 4th 2019 by Whats on Northeast 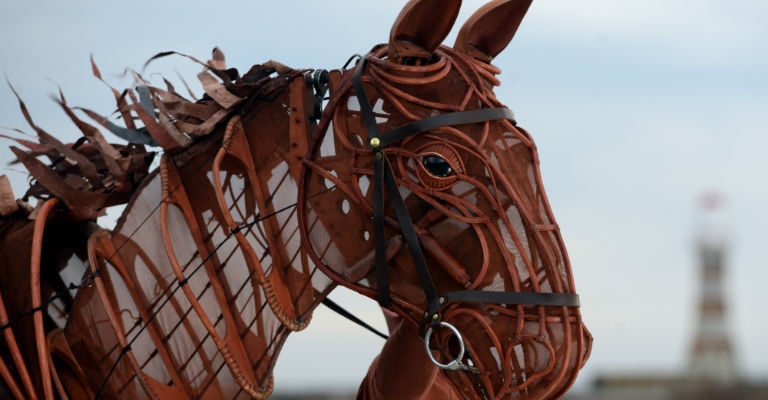 After a phenomenal run in 2014, the National Theatre’s acclaimed play WAR HORSE is set to gallop back to Sunderland Empire for a limited 3 week engagement from 6 – 23 February 2019 as part of its 10th Anniversary UK Tour.

Based on the beloved novel by Michael Morpurgo, this powerfully moving and imaginative drama, filled with stirring music and songs, is a show of phenomenal inventiveness. At its heart are astonishing life-sized horses by South Africa’s Handspring Puppet Company, who bring breathing, galloping, charging horses to thrilling life on stage.

The 34 strong cast for this acclaimed production of War Horse, which began its major new tour dates across the globe last month in Glasgow includes Scott Miller as Albert and Newcastle born, Ben Murray as Songperson.

At the outbreak of World War One, Joey, young Albert’s beloved horse, is sold to the Cavalry and shipped to France. He’s soon caught up in enemy fire, and fate takes him on an extraordinary journey, serving on both sides before finding himself alone in no man’s land. Albert, who remained on his parents’ Devon farm, cannot forget Joey. Though still not old enough to enlist he embarks on a treacherous mission to find him and bring him home.

War Horse, which has been seen by nearly eight million people worldwide, finished its record-breaking eight year London run at the New London Theatre in March 2016 and completed its 10th Anniversary UK tour at the National Theatre in January 2019. It has won 25 awards including the Tony Award for Best Play on Broadway.

War Horse is directed by Marianne Elliott and Tom Morris, designed by Rae Smith, with puppet direction, design and fabrication by Basil Jones and Adrian Kohler for Handspring Puppet Company, lighting by Paule Constable, and movement and horse choreography by Toby Sedgwick, with video design by Leo Warner and Mark Grimmer for 59 Productions, music by Adrian Sutton, songmaker John Tams, and sound by Christopher Shutt.

War Horse is an unforgettable theatrical event which takes audiences on an extraordinary journey from the fields of rural Devon to the trenches of First World War France.

War Horse is produced on tour by the National Theatre.