Posted on September 26th 2019 by Whats on Northeast 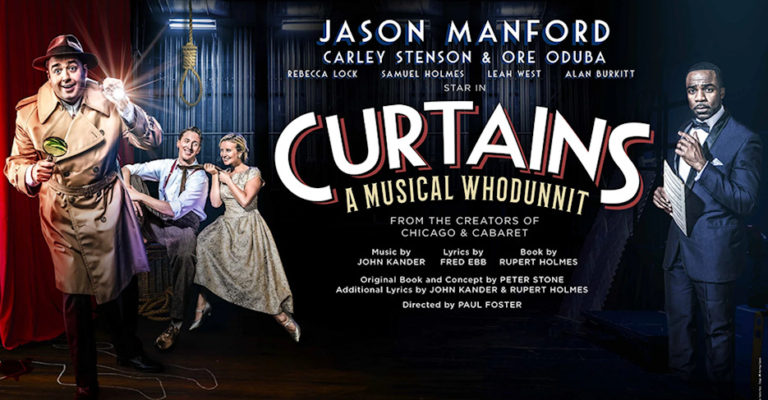 In a church hall nestled alongside high rise flats and just behind the bustling high street, the cast and crew of soon to be smash hit musical Curtains are going through their last few weeks of rehearsals.  With household names such as Jason Manford, Carley Stenson and Ore Oduba on the bill and directed by Paul Taylor this is the cumulation of 18 months of preparation for a show that blends murder mystery, comedy, great songs and a harking back to the glitz and glamour of the 1950’s.

Written by the creators of arguably two of the last century’s greatest musicals (Cabaret and Chicago) Curtains is something rarely found in this modern age of instant knowledge and even quicker criticism; a show that is so fresh and new and exciting that (for now at least) not many people are aware of it.  It had a small run on Broadway in the mid 2000’s, has been played by amateur and high school groups in the US and popped up a few times in other countries, but this new tour will prove to be its UK debut across the country and is destined to become the ‘must see’ production of the past (and next) 5 years.  Darlington Hippodrome will be the first theatre in the North East to present Curtains and a wonderful opportunity for the area.

The premise is quite a simple one – the theatre production of Robbin’ Hood, a Wild West tale, is in turmoil on its opening night as their leading lady is murdered, but as local detective Frank Cioffe begins to investigate it becomes clear that there are more than one or two who might benefit from her demise.  A classic play within a play ensues with twists and turns aplenty.

We met up with the leads and director as they took a break from rehearsals and asked them a few questions about playing in Curtains.

Jason Manford who plays detective Frank Cioffe. Jason is as warm and funny off stage as he is on it, instantly relatable and an all-round great guy.

Jason, you’re enjoying quite a renaissance on TV and radio at the moment with Scarborough, QI, 8 out of 10 cats, Absolute Radio and even some reruns of your Plus Net ads, are some people surprised that you are also a stage actor and even more so that you can sing?

JM I come from a large family, my grandparents had 12 children and, in the times before TV they needed to be able to keep them entertained, so my grandmother always made sure they sang together and this has continued through my parents and down to me.  Singing is a great community activity, and even though I would have never classed myself as a singer as such, I really enjoy it.  Starting off in stand up, I learned very quickly that regardless of what stage you’re on, it’s all acting so I guess I’ve always been able to perform.

I saw you singing with Alfie Boe in Preston, especially Stars from Les Miserable which is a very powerful song, and you have had lead roles in The Producers and Chitty Chitty Bang Bang .  Is the singing element of Frank Cioffe something that particularly appealed to you about the role?

JM Actually, the appeal was everything I know and love about theatre is here in Curtains – great songs, a brilliant script that is witty and funny, the plot twists of a murder mystery and a chance to be a part of a show created by Ebb and Kander.  I love Cabaret and Chicago so this is a bit like finding an album by your favourite group that you didn’t know existed.  Added to that the wonderful cast and a brilliant director in Paul (Foster) and it was too good an opportunity to miss.

Tell us a bit about your character, Frank Cioffe

Frank is a detective, a very good detective, but his real passion is theatre.  He is a member of his local Am Dram company and lives all year for their summer production so when he gets the chance to investigate a murder at a ‘professional’ production, surrounded by ‘real’ actors he is in his element.  He thrives on the energy of being around the show which gives him even more determination to not only find the killer but to help ensure the show goes on.  There is a little bit of a love interest, and some outright crazy characters he has to deal with but he manages to stay focussed.  I guess he’s a bit Columbo, a bit Poirot and a lot (Leo) Bloom (from The Producers, a role which Jason played in 2015), in fact there is a great similarity between Frank and Leo – they are both in quite mundane day jobs hankering for the bright lights and razzmatazz of the stage.

As many people will not have heard of Curtains, how would you sell it?

JM Curtains has all the elements of the great comedy musicals, song and dance routines to rival the classics and the intrigue of a murder mystery – what’s not to love?

Carley Stenson plays Georgia Hendricks one half of the songwriting team behind the show within a show Robbin’ Hood. The room lit up when Carley came in, she is the absolute definition of ‘a smile’ with an infectious and completely disarming personality

Carley, you have a wonderful pedigree for musical theatre having starred in Les Miserables, Legally Blonde, Shrek, Spamalot – how does Curtains rate with these shows?

CS It’s not often you get a chance to perform in a ‘new show’, one that has not had the exposure or perhaps hype as others so it’s both exciting and nerve racking – we are almost responsible for whether Curtains makes it in the UK but with that being said, a show by Kander and Ebb is pretty much a seal of quality.  Curtains is a delight, funny, clever and some great songs

It’s been 10 years since you left Hollyoaks so in effect you’ve been doing theatre just as long as you did TV – do you feel that theatre is your true calling now?

CS I loved Hollyoaks, the storylines were great, intense and it meant I personally benefited from being associated with such a successful show, but I have always loved theatre.  Me and my friends used to put on our own shows, creating costumes, sets and performing so now I have been able to do it as a job has been wonderful.  I have been very fortunate to plays some iconic modern roles in musical theatre.

Curtains is a musical murder mystery but from watching the rehearsals, there also seems to be a lot of humour too, is it safe to say that it is more a comedy than anything else?

(Carley’s eyes positively twinkle and her smile grows even brighter) Yes, there’s a lot of comedy in Curtains, helped in no small part by the brilliant cast we have and the way we have all embraced bringing this ‘new’ show to the UK .  We have had so much fun preparing for this show that you can’t help transfer that to the stage and hopefully that will give the audience a feel good factor when they watch it.  There are times where I have to avoid eye contact with one or two of the cast or I know I will risk laughing myself, Jason (Manford) is simply brilliant in his comedic timing and Sam (Holmes who plays the show’s Director Christopher Belling) is so quick with his acerbic wit that he has me in stitches.

As we have mentioned to others, Curtains is relatively unknown at present.  How would you sell it to an audience whose time (and money) is being chased by other shows, cinema, TV etc.

CS Curtains is a hark back to the grand productions of 1950s MGM – a time when things were done on a massive scale of glamour and glitz.  We have some great big musical numbers, brilliantly written and great fun to perform. It is unapologetic in giving the audience a chance to escape the day to day problems and worries, not only is it funny it is very clever and will keep everyone guessing right up the last.

Paul, you have directed some of traditional theatres great shows; Kiss Me Kate, Annie Get Your Gun, Tell Me On A Sunday, Singin’ in the Rain to name but a few, how does Curtains rate?

PF Any Kander and Ebb show already comes with a level of brilliance built in so part of my challenge is not to ruin it, but Curtains, as a relatively unknown show to the general public, carries a little more risk.  That being said, I feel that the art of putting on a great show is to tell a story, once the cast are on board and the stage is set, it is the story that becomes the show so in that respect I think Curtains will be a huge hit.  It might take a little time for people to realise, as with anything new you need advocates and fans to help spread the word, but with our cast I am confident that people are going to love it.

You mention the cast and names such as Jason (Manford), Carley (Stenson) and Ore (Oduba) will undoubtedly bring a degree of interest, how have they and the rest of the cast taken to the roles.

PF I believe that the art of being a good director is not to set limits on people but to help them understand what you need and let them grow the part.  If you place a plant under glass it might grow quickly but it will stop when it reaches the glass so I try not to have any upper limits. The roles are well enough defined to carry the story but there is so much scope for them to develop that everyday I am seeing more and more.

And with that, Paul and the gang headed back to rehearsals, perfectly delivering the theatrical coup de grace and leaving us wanting more.

From our brief watch of rehearsals, it is clear that Curtains is going to be huge and will give audiences the chance to be there at the start – think Rocky Horror Show, Little Shop of Horrors, Grease, The Full Monty, even Hamilton, shows for which the boast of “I saw it first” have become bragging rites for theatre goers the world over.  This is a huge coup for Darlington to be the first theatre in the North East to present Curtains and wonderful recognition of the appeal the Hippodrome has for touring productions.  It’s sure to sell out soon, grab your tickets now.

For more details and some exclusive cast videos check out Curtains website – https://curtainsmusical.com/