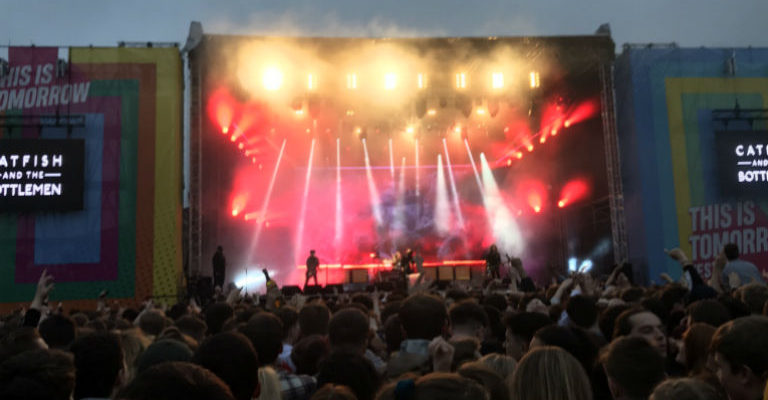 The Welsh rock band known as Catfish and the Bottlemen were formed in 2007 and visited Newcastle on Friday as part of the ‘This is Tomorrow’ festival. At first, I thought it was strange going to see the much loved band performing in a car park at Spillers Wharf Newcastle as surely they could take over a big, indoor venue. However, the venue was perfect and, once finding Spillers Wharf, it really brought everyone together to enjoy the music. The gates opened at 5pm with support acts taking the stage, and finished with Catfish and the Bottlemen at around 11pm.

The car park filled up as Catfish and the Bottlemen quickly sold out, and was the best venue to fit everyone in. Although it was hectic, the mosh pit bouncing and every one singing along to the songs together made the night a one to remember. Drinks were spilt all over everyone as the excitement of the band entering the stage had everyone in their zone. The screens allowed us to watch the band perform better as views to see the band on stage were blocked by the taller people of the audience in front.

Stalls for fast food, serving burgers, hot dogs and chips, and stalls for Waffles with Nutella were scattered all over the venue as well as beer tents which attracted all visitors before drinks were thrown into the crowd. There were no cloakroom facilities on the site but plenty portaloo.

The support acts included Sam Fender, Little Comets and Everything Everything. Most of the audience also knew and sang along with their songs. The energy came from Catfish singing songs such as ‘Pacifier’, ‘Twice’, ‘7’, ‘Cocoon’, ‘Soundcheck’ and more, with Catfish introducing each song and telling the crowd how thankful they were for the support from Newcastle’s audience. The atmosphere was amazing with the lights from the stage, in red, white, blue and green lighting up the night, the stage had everyone’s attention.

As the night finished, security guided the crowds to the safest exit. Friends I went with all said they enjoyed the night and wanted to do it all over again. I personally loved the night, the atmosphere, the band themselves and their songs, the crowd singing along and everyone enjoying themselves. I came out wanting to listen to Catfish songs even more!