Posted on November 13th 2019 by Whats on Northeast 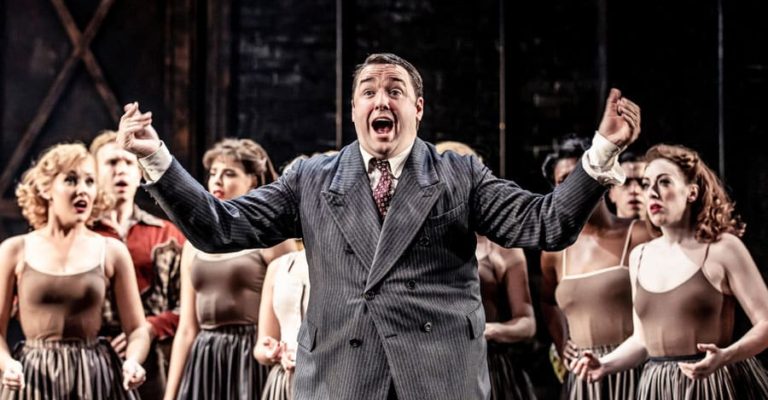 Set in 1950’s Boston, Curtains follows the story of a pre-broadway musical whose cast and crew suffer the trials and tribulations of not only the murder of their leading lady on opening night, but the subsequent twists and turns of the resulting investigation.  Set against the backdrop of ‘Robbin Hood’ a musical western, this play within a play (or more accurately, a musical within a musical) is as much about the saving of the show as much it is about the murder mystery.  As the detective leading the investigation puts the whole theatre on lock down, relationships fray, pressure rises and fingers are pointed.  There are plots and subplots galore, some very clever and funny musical numbers and no shortage of jokes.

From the opening bars you can hear the refrains of Kander & Ebb classics such as Chicago and Cabaret but this is much more than simply another of the same.  Director Paul Foster has made sure this lesser known show stands on its own; it has a familiarity which immediately makes it accessible yet has enough in reserve to maintain intrigue and a freshness to encourage repeat viewings.

Jason Manford (known recently for Scarborough on TV and The Producers and Chitty Chitty Bang Bang on stage) plays the lead character of Detective Frank Coiffi, a wannabee thespian and amateur musical theatre star who has as much input into resurrecting the stricken show as he does in solving the crime.  Manford holds his character perfectly, part Columbo, part Poirot with a pretty decent Boston accent to boot.  He revels in the musical elements, giving us a chance to hear a great voice and some pretty nifty dance moves and, as one would expect his comic timing is impeccable.

Playing opposite Coiffi, in the role of Georgia Hendricks, the show’s lyricist who is thrust into the limelight following the untimely death of the original lead, is Carly Stenson.  No stranger to musical and comedy theatre, Carly lights up the stage regardless of whether it’s her scene or not – she has a wonderful, powerful voice and, as seen in the finale to act 1 number ‘Thataway’ is a very adept dancer to boot.  Her duets with Andy Coxon as Aaron Fox, her on stage writing partner,  are simply magical.

Two other standout performances are Rebecca Lock as show producer Carmen Bernstein and Samuel Holmes as show director Christopher Belling.  Rebecca plays Carmen with strength, style and plenty of sass, very reminiscent of the Mama Morton part in Chicago but with the Boston dirt under her fingernails.  Samuel Holmes however, is totally English and because of that he can get away with pretty much anything.  His Belling is acerbic, driven, suffers no fools and knows that, despite anything on the bill, HE is the real star of the show.  Totally captivating and utterly charming.

Packed full of musical numbers this is a wonderful opportunity for the people of Darlington to see the early stages of what is destined to be a smash hit.  Curtains has already announced it will soon transfer to the West End at the Wyndham Theatre so there’s no better time to grab a ticket and enjoy some brilliant 5 star comedy musical murder mystery.