Posted on November 8th 2018 by Whats on Northeast 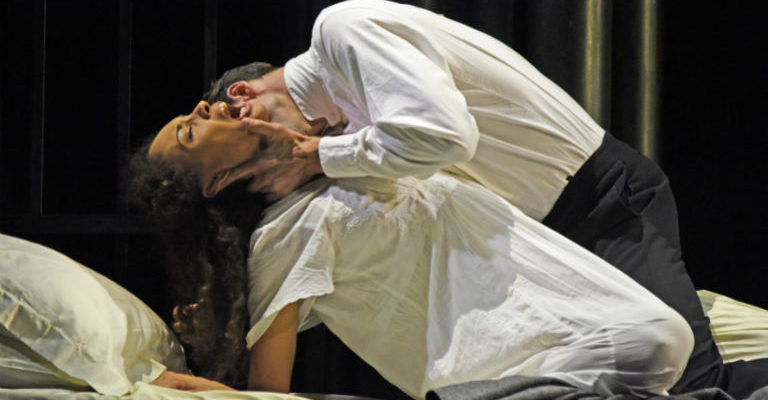 Maybe quite timely, especially with the dark nights setting in and the spectral lights of Halloween not yet faded into the fairy lights of Christmas, I was thrilled to watch the spine chilling vampire classic Dracula at Darlington Hippodrome this week.

Chances are, the mere mention of vampires and that particular cult genre of books and films, would likely bring the name Dracula to the forefront of your mind. And whether it conjures up images of the film noir Nosferatu or the classic Christopher Lee film from the 50’s, the nuances are the same; man with fangs who drinks blood and wants to leave Transylvania for new shores, in the search for new blood. However, the frightening gothic tale by Bram Stoker has been reimagined for a contemporary 9 week tour that sees the show play at Darlington from the 6th – 10th November.

From the shows onset, you’re on edge, but in a thrilling way. Immediately, the audience is plunged into complete darkness, with contorting bodies moving oddly on the stage against bright pulsing lights, which makes for a clever, exciting and intriguing beginning; certainly one that I’ve never experienced before in a theatre show.  The show itself is a perfect storm of an ingeniously used minimalist and dark set, chilling music and strobe lighting that, together, create quite an unnerving atmosphere for the watcher. There are also regular jump scares that wreak havoc with your nerves – it wasn’t just me that jumped a mile, I could hear those around me muttering about nearly having a heart attack too. And, of course, the underlying macabre tone of the story is never too far away from your imagination. Simply put, it was gripping, illusionary and absolutely brilliant.

The cast seemed to work well together; but for me, a stand out performance came from Cheryl Campbell, who portrayed Lady Renfield, a demented patient at the local mental hospital, who regularly spoke into the night at persons unknown and ate some rather disgusting things. There was a slight endearing characteristic about Lady Renfield’s character, where you were suckered into her pleas, then catapulted into the frenzied world of her mind a split second later. And Professor Van Helsing, played by Philip Bretherton, brought a glimpse of comedy to the seriousness of the story.

Compared to other shows, it was a quick performance, and I’m not sure how different the reimagining was from Stokers original concept. Having said that, I loved it and hats off to the Touring Consortium Theatre Company for putting on such a great show.

There is one note of warning, however, if you have any photosensitivity issues (eg epilepsy), this performance probably isn’t for you as there is strobe lighting throughout.