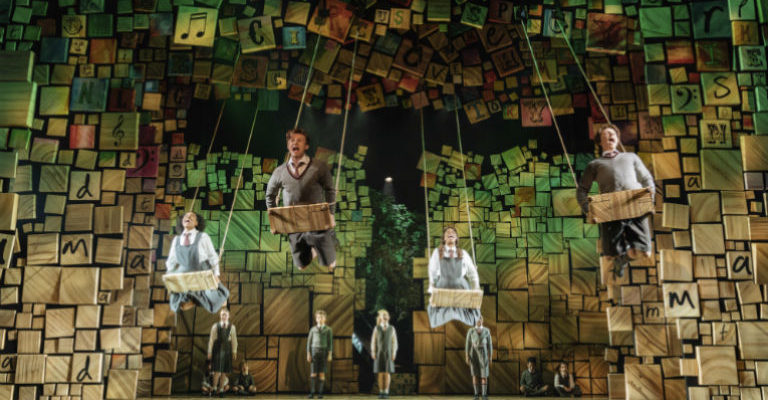 Fresh from the award winning & sell out run in the West End, Tim Minchin’s musical adaptation of Roald Dahl’s tale is a wonderful family treat guaranteed to leave everyone wishing they too were 5 again.

Produced by The Royal Shakespeare company, the story about a little girl’s discovery of her super powers and the eventual comeuppance of her abusive parents and the horrible bully Miss Trunchbull is one of the most endearing happy endings in children’s literature – coupled with some very catchy tunes and brilliant lyrics makes for one of the best modern musicals totally worthy of all the awards and accolades.

The position of Matilda, played for this performance by Annalise Bradbury must go down as the best children’s role since Annie – there is no end of opportunity for mischief, devilment and cheeky trickery and xxx clearly has as much fun as the audience.  Of course, for each hero there must be an anti-hero – for this there are two in particular – Mr Wormwood (Matilda’s unscrupulous car salesman father) is dismissively played by Sebastien Torkia, full of annoyance that he even has a daughter and happy to try and chase the next big con.  Ms Trunchbull, the sadistic chokey-loving, children-hating, hammer throwing elementary teacher is undeniably the real star of the show – Craige Els seems 8 feet tall amongst the children and possesses such a menace that there were many adults in the audience who also quivered. Of course, the final events show that in the end it is Ms Trunchbull’s past that finally does for her and justice prevails.

Special mention must go to Miss Honey, Carly Thoms, whose beautiful voice acted as a complete opposite to the gruff Ms Trunchbull – Carly is a delight and totally believable as Matilda’s new adaptive mother.

Split between Matilda’s new school and her evenings at the TV obsessed front room, the set & scenery (managed by Head of Stage Steven McGookin) has an uncanny familiarity which makes it very easy to slip into Matilda’s nightmarish world.   Brilliantly changed during performance, there is an almost balletic quality to the scenes morphing from one set to another which meant the audience never had need, nor chance, to look away – even during the interval there was a clever addition of Mr Wormwood bestowing his wisdom (which would certainly keep the younger viewers entertained during the 15 minute break).

The chance to see Matilda here in the North East is certainly one not to be missed – built on the quality of Roald Dahl, fed by the brilliance of Tim Minchin and performed by a whole cast of ridiculously talented children it remains a classic of modern musical theatre.