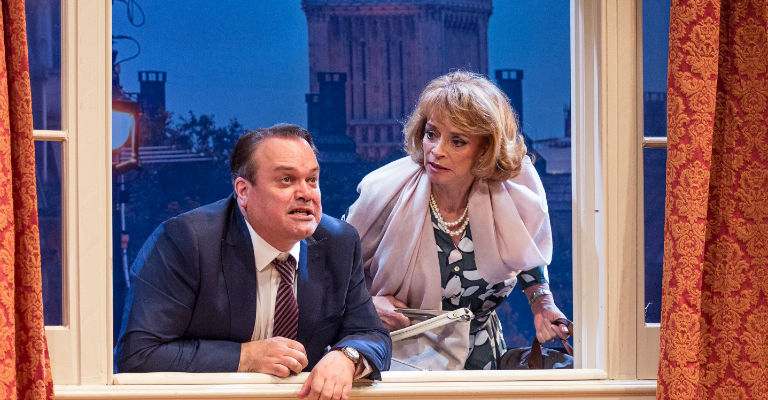 A farce is defined as “a comic dramatic work using buffoonery and horseplay and typically including crude characterization and ludicrously improbable situations”. Often thought of as a quintessential British form of theatre, farces were designed to play on the disparity between the haves and have-nots, the posh and the poor, upstairs vs downstairs, in an attempt to allow people to laugh out loud at situations which are in all likelihood, happening in real life.

In Out of Order, Ray Cooney brings the farce right up to date and into the glare of the modern political spotlight. In fact, if it wasn’t for the costumes and stage, it would be very easy to think you were watching a Private Eye exposé on Westminster.

Set around the attempts of Tory MP Richard Willey (Jeffrey Harmer) to enjoy an illicit night with the Labour Leader’s secretary Jane Worthington (Susie Amy) instead of attending a cross party debate, every conceivable mishap befalls him, often of his own making, and he tries to dig himself out, protect his reputation and slope his shoulders of responsibility. Finding what he believes is a dead body, trapped in the sash of his hotel room window, Willey could have done the sensible thing by calling the authorities and taking his medicine, but hey, that a great play would have not made.  Instead, he drafts in his tortured and put-upon PPS, George Pigden (Shaun Williamson), setting in motion an ever-increasing catalogue of bizarre, ludicrous but always hilarious events.

The cast is brilliant, simply brilliant and kudos must go to casting director Mark Frankum for bringing together some very well-known faces who never once step back into the roles for which they are best known. Harmer conjures up the spirit of Rick Mayall from his Alan B’stard New Stateman times (a role which I believe was Mayall’s absolute best). He is sly, controlling, disingenuous, entitled, well, you know, a stereo-typical ‘Tory’ MP. James Holmes, as the waiter, has the look and feel of Andrew Sachs’ Manuel but with a British Steel core – always looking for his tip before and after providing whatever room service is required.

I guess if I’m making comparisons to sitcom legends then Arthur Bostrom as The Manager would be likened to Basil Fawlty but that would be unfair to Bostrom; he is less madcap and more of a straight man, which gives each scene a lightning rod to ground the silliness. Cameos by Sue Holderness as Willey’s wife Pamela, and Elizabeth Elvin as Nurse Gladys Foster ensure that the scenes continue to flow with variety while Jules Brown (Ronnie Worthington) drew some very approving gasps from the ladies sat around me.

Star of the show is Shaun Williamson. I owe a sincere apology to Shaun. Sure, I knew his roles of the past and was aware that he didn’t mind being cast in roles that send himself up but I didn’t realise just what a truly fantastic comedic actor he is. His timing is on a par with the true comedy greats and his mannerisms, facial expressions and slapstick would rival those of Laurel and Hardy, Norman Wisdom and Benny Hill (in fact, should they ever decide to do a film of Benny Hill’s life then Shaun would get my vote to play the Angel master).

It’s difficult to explain all the scenes, so quick is the pace and incessant the gags and pratfalls, but suffice to say, you must ensure you grab every opportunity to breathe otherwise you could find yourself laughing non-stop until you pass out. The beauty of Cooney’s writing is that this play can be easily updated to include current references and thus make it always feel very relevant; Jeremy Corbyn and Theresa May are both name-checked, whilst the behaviour of the lead characters seem to be constantly reflected in most Sunday papers.

On a day that was fraught with sadness, angst and anxiety, it was perfect to be able to step outside of the world and enjoy a few hours of unapologetic fun in a wonderful theatre.