Posted on January 11th 2018 by Whats on Northeast 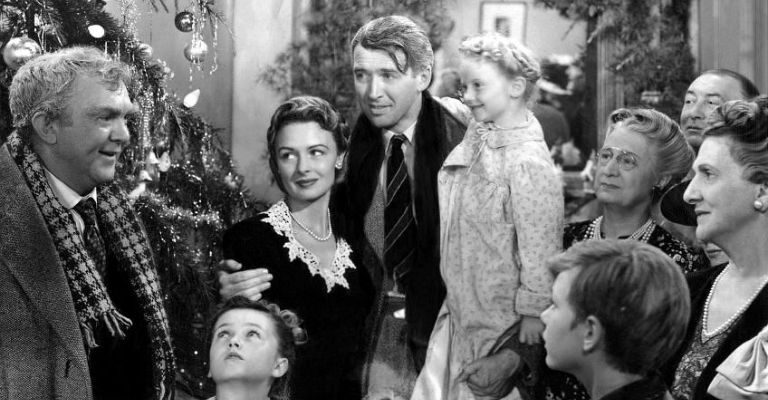 As a self proclaimed Christmas fanatic I can’t believe that It’s a Wonderful Life has escaped my festivities for so long.  I should have embraced Frank Capra’s classic much sooner, as I left the theatre knowing that I had been missing out on the ultimate Christmas film for more years than I care to admit.

To briefly summarise It’s a Wonderful Life for those that haven’t seen it; it’s Christmas Eve in Bedford falls and everyone is praying for the safe return of George Bailey (James Stewart) – a much loved and selfless man who finds himself literally on the edge, believing he’s more valuable to those he loves, dead. We are then taken on a chronological journey of George’s life up until present day when he meets Clarence – an angel trying to earn his wings. My favourite scene in the entire film is George and Mary’s (Donna Reed) first date. They’re in sodden borrowed clothes, their chemistry’s overflowing, the conversation is endearing and George offers to “lasso the moon” for Mary. It’s a scene that portrays the bond that will be forged between Mary and George but also, attests to George’s character as a wonderful man.

Throughout the entire film, I couldn’t help but draw comparisons to A Christmas Carol, not for the similarities but rather for the stark differences that run along a similar path. Instead of Scrooge, a man detested for his greed, you have George; a man adored for his generosity. Instead of the Ghosts of Christmas trying to show Scrooge why he should be a better person, you have Clarence the angel, showing George how miserable everyone would be without him and giving him reason to live. Although A Christmas Carol was published in 1843 and It’s a Wonderful Life was released in 1947, they both focus on kindness and it’s effects on others.  This makes them timeless and in turn portrays the true meaning of Christmas.

As soon as I sat down in the theatre and saw how full this screening was, I knew that it was going to be as good as I had heard. There was excitement in the air, and not only due to the complimentary mulled wine. As soon as the black and white introductions started rolling, the magic started and it didn’t falter for a second. The credits were deservedly met with rapturous applause; everyone left in the Christmas spirit, and if they were as lucky as me, with a new tradition.