Posted on September 12th 2016 by Whats on Northeast 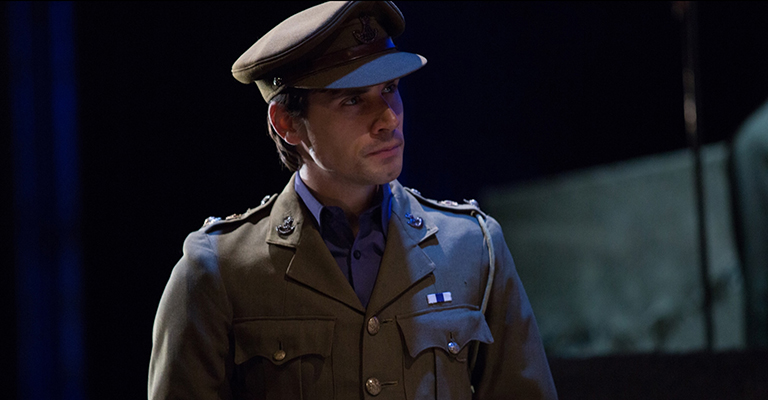 As war broke out in 1914, four brothers from County Durham answered the call of duty – Three joined the Durham Light Infantry and one the Navy. All became officers, one, at 25, becoming the youngest ever Brigadier General in the British Army. Between them they won two Victoria Crosses, two Military Crosses and a Distinguished Service Order. Only one survived. Corina Rodney’s The Fighting Bradfords, directed by Psyche Scott, brings their extraordinary story to the Gala Durham stage.

An abstract stepped pillbox-like structure meets the audience on curtain rise, which forms the backdrop for the duration of the play. Such a simple setup keeps the focus on the important part of the story – the brothers and their family. With a little imagination (much like that shown by the Bradford Boys as they played games and play-fought in a scene prior to the breakout of war) it allowed the scenes to snap fluidly between the County Durham countryside, the trenches of the Somme, and the family home back in the north east.

For the opening the backdrop plays the role of Whitton Park in 1963, as Chris Connel’s remarkably sprightly Colonel Sir Thomas Andrews Bradford works his way to the top of the vantage point, with a little help from his walking stick. After taking in the view, he is met by a young, idealistic History student, played effortlessly by McDonald (who also plays Roland Bradford, the Brigadier General), looking for help with his dissertation.”Is it enough just to exist? What do you care about? What would you fight for?” posits Thomas to the student, and it’s these questions that from the central theme of the production.

As the years since tick by, it’s easy to take for granted the sacrifice that the young men and women who went to war and lived through its devastation made. It’s also too easy to see the parallels between the troops going off to war in 1914, to those who have fought more recently in the Middle East, and wonder what lessons, if any, have been learnt.

The camaraderie of the men on the front is brilliantly portrayed, especially the the gallows humour that gets them through the darkest moments. However I was always mindful that the jokes and they share could just as easily be being told back in the pubs back in County Durham rather than at the front-line of war.

It would also be impossible not to be moved by the devastation caused to the boys’ mother Amy, brilliantly played by Jessica Johnson. The line “I lost my boys and they’ve replaced them with these medals” was utterly devastating.

It was a difficult watch at times, and so it should be. But this was a caring, poignant, humour-flecked performance, which did the Bradford’s story justice, giving the audience an opportunity to remember the sacrifices made in WWI, and leaving much to think about in a modern day so far removed from life in those times.

The Fighting Bradfords runs from Thursday 8 – Saturday 17 September at The Gala Theatre,Durham. Tickets from £12 – £15 are available by contacting 03000 266 600, visiting Gala in person or online at www.galadurham.co.uk.  A Pay What You Like performance is being held on Monday 12 September, booking available by phone or in-person only.