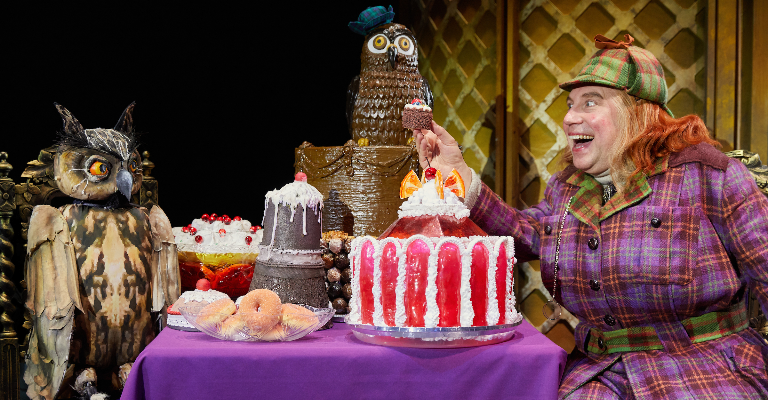 Birmingham Stage Company, the award-winning West End producers of Gangsta Granny are set to bring a hoot of a show to Sunderland Empire next month (28 June – 1 July) when the world premiere of David Walliams’ Awful Auntie hits the stage.

Awful Auntie tells the story of Stella, who when she sets off to visit London with her parents has no idea her life is in danger. Waking up from a coma three months later, only her Aunt Alberta can tell Stella what has happened. But not everything Aunt Alberta tells her turns out to be true and Stella quickly discovers she’s in for the fight of her life against her very own awful Auntie. David Williams’ amazing tale of frights, fights and friendship features a very large owl, a very small ghost and a very awful Auntie!

Timothy Speyer (The Witches, James and the Giant Peach, Fantastic Mr Fox and The BFG) plays Aunt Alberta, Stella’s awful auntie and Georgina Leonidas will play Stella Saxby, and audiences may recognise her as Harry Potter’s fellow quidditch player, Katie Bell when she appeared in three of the Harry Potter films.

Awful Auntie follows the BSC’s record-breaking tour of David Walliams’ Gangsta Granny and we are delighted to welcome back to the Sunderland Empire stage Ashley Cousins (Soot) and Richard James (Gibbon), Ashley and Richard recently appeared at the venue in the triumphant run of Gangsta Granny.

Families around the country will not want to miss Awful Auntie, which promises to be awfully thrilling fun for everyone over 5!

For your chance to win a family ticket (2 adults, 2 children) to the performance of Awful Auntie at Sunderland Empire on Thursday 28 June 2018 (7pm), simply answer the following question below: