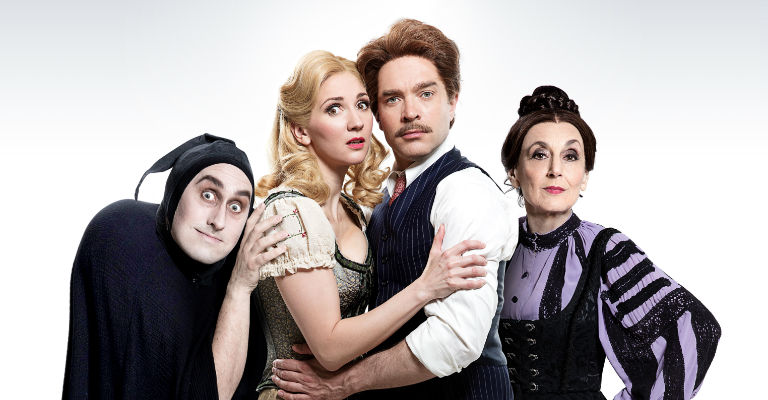 We’ve teamed up with Newcastle Theatre Royal to bring you the amazing chance to be able to win a pair of tickets to attend Young Frankenstein on its opening night on Saturday 26th August!

Mel Brooks is bringing his classic monster movie to life in a new musical, and it’s coming to Newcastle before the West End!

Young Frankenstein, the wickedly inspired re-imagining of the Mary Shelley classic, sees Frederick Frankenstein, an esteemed New York brain surgeon and professor, inherit a castle and laboratory in Transylvania from his deranged genius grandfather, Victor Von Frankenstein.  He now faces a dilemma – does he continue to run from his family’s tortured past or does he stay in Transylvania to carry on his grandfather’s mad experiments reanimating the dead and, in the process, fall in love with his sexy lab assistant Inga?

Local lad and comedy hero Ross Noble and screen stars Lesley Joseph and Hadley Fraser will lead the cast of the brand new all-singing all-dancing extravaganza, which is based on the Oscar-nominated smash hit movie of the same name.  The show will run for two weeks in Newcastle as a ‘pre-West End’ season before it opens at London’s Garrick Theatre in late September.

Hadley Fraser will play the title role of Dr Frederick Frankenstein, grandson of the infamous Dr. Victor Frankenstein, and immortalised by Gene Wilder in the 1974 movie. Hadley’s widely acclaimed stage credits include Marius in the West End production of Les Miserables, a show to which he returned in the role of Javert. He was in the Kenneth Branagh Theatre Company for The Winter’s Tale & Harlequinade at the Garrick Theatre and starred alongside Tom Hiddleston in the Donmar Warehouse production of Coriolanus, and performed there again in City of Angels, The Vote and Saint Joan.

Based on the hilarious 1974 film and co-written with Thomas Meehan, Brooks will once again collaborate with Broadway director and choreographer Susan Stroman for this all-singing all-dancing new production, bringing his and Gene Wilder’s classic movie to life on stage.

For the chance of being able to win a pair of tickets to attend Young Frankenstein at Newcastle Theatre Royal on Saturday 26th August at 7.30pm, simply complete the form below and answering the following question.

Q: Who directed the original film version of Young Frankenstein?

The winner will be contacted via email on Thursday 17th August.