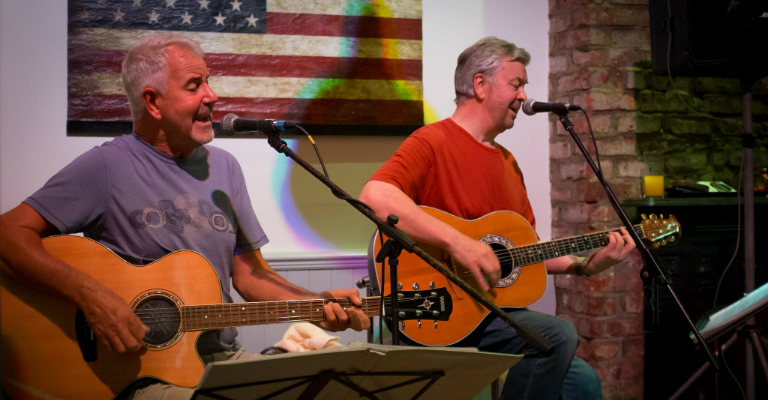 Mike Hall and Dave Robson from well-known local band After Midnight will be taking time off from their Classic Clapton Tour to perform a rare acoustic set at Porters Café and Music Bar on Friday 27 January.  Their previous appearances here have quickly sold out. You are therefore advised to book early!

AFTER MIDNIGHT were formed in Newcastle in 1985.  In the past 30 years they have become one of the best-loved bands on Tyneside.  For the past 15 years, the band has concentrated on their Eric Clapton tribute concerts, performed at theatres all over the UK, under the name CLASSIC CLAPTON.

They have toured throughout the UK including concerts at The Royal Festival Hall, London and a triumphant appearance at Glastonbury Festival in 2002.  They have performed numerous concerts in Europe including Spain, Estonia, Holland and France.  In 2009 they appeared at St Andrews Auditorium in Mumbai.  A 10,000 mile round-trip for 1 concert, but it was a great experience. They were invited back for 3 more concerts in India in January this year. On the final night of the tour 17 January 2016 Classic Clapton performed in front of 3500 people in the open air sports arena in Mumbai. You can see a photo album plus videos from the 2016 Indian tour on their Facebook page:- www.facebook.com/classicclapton

The band continues to perform it’s CLASSIC CLAPTON tribute concerts throughout the North East. Their next Clapton Tribute gig will be at Whitley Bay Playhouse on Friday 21 April 2017. Tickets are now on sale.  Fans are advised to book early!

Mike Hall is the guitar/vocalist/front-man of After Midnight. It has been said that he not only looks like Eric Clapton, he sings and plays guitar like him too!  Bass player Dave Robson has been with the band on and off since 1995.  Dave is also a talented song-writer and he is a former member of north east chart band Geordie.  In fact he was with them at the time Brian Johnson left to join AC/DC.

For this unplugged gig at Porters Mike & Dave will both sing and play guitar, performing covers of music The Beatles, The Eagles, Crowded House, Eric Clapton and a number of 60’s and 70’s classics. They will even include at least one of Dave’s original compositions.  NB: this will NOT be an Eric Clapton Tribute Gig.