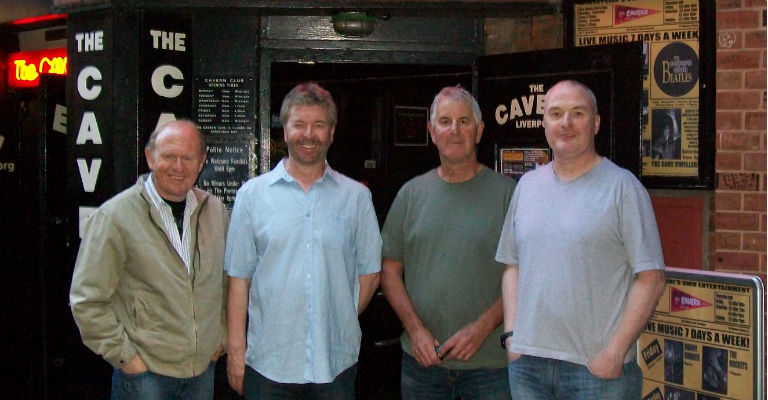 Tickets are £10, available in advance from The Golf Club

NB: This will NOT be an Eric Clapton tribute gig although one or two of Slowhand’s songs will be covered, along with music by Free, Dire Straits, The Beatles, Steely Dan and many other rock classics.

After Midnight performed their first gig in December 1985 at The Cumberland Arms Byker.  Since then there have been many highlights, including support slots with Doctor Feelgood, Steve Marriott & Jethro Tull.  In the past 30 years After Midnight have become one of the best-loved bands on Tyneside.

TYNE TEES TELEVISION made a programme about After Midnight, called ‘COVER THEIR TRACKS’.  They filmed the band’s concert at Newcastle Opera House, in front of nearly 600 ecstatic fans.  It was shown in 2000 leading to national recognition.

For the past 15 years, the band has concentrated on their Eric Clapton tribute concerts under the name CLASSIC CLAPTON.  During that time they have performed throughout the UK and Europe including concerts at The Royal Festival Hall, London and a triumphant appearance at Glastonbury Festival in 2002.  They have performed numerous gigs in Europe including Spain, Estonia, Holland and France.

In 2009 they appeared in Mumbai.  A 10,000 mile round-trip for 1 show but it was a great experience. They were invited back for 3 more concerts in India in January 2016. On the final night of the tour they performed in front of 3500 people in the open air sports arena in Mumbai. On 18 March this year they appeared in Colombo, Sri Lanka.

After Midnight have performed sold-out gigs at most north east venues but in December 2010 they made their first ever appearance at Newcastle City Hall.  800 people travelled from throughout the UK to help the band celebrate their 25th Anniversary.  They also performed a SOLD OUT 30th Anniversary Concert at Sage Gateshead on 5 December 2015.

The band has released three albums.  Firstly “THE MUSIC OF ERIC CLAPTON” contains brilliant cover-versions of 17 Clapton Classics.  Their second album is a live double CD ”CLASSIC CLAPTON Unplugged”  recorded at Belfast Waterfront Hall.  In 2005 they released their third album “CLASSIC CREAM” – featuring 20 songs by the sixties supergroup.  All three albums will be available for purchase at Chester le Street.