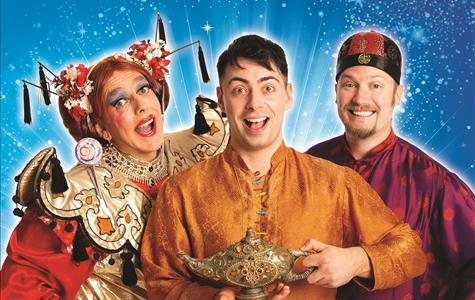 There’ll be plenty a familiar face on stage including Euan McIver – the fabulous dame who’s costumes, quick wit and fluttering eyelashes have dazzled our pantomime audiences since 2015; Ross Graham who’s had audiences laughing in every pantomime at The Maltings (as well as starring in sell-out shows Here Come The Girls and Damp Knight Improv Comedy) and the powerhouse Wendy Payn – who also writes, directs and produces the pantomime!

Our pantomimes have been going from strength to strength, and with Cinderella breaking our sales records BEFORE we’d even had the first performance – we know Aladdin is going to be bigger and better than ever before.

“Maltings’ professional production was nothing short of magical…brought to life by a cast of fantastic actors and actresses, a brilliant soundtrack and, of course, some great one-liners” – Berwick Advertiser (Cinderella 2018)

“The Maltings has pulled it off again putting on a performance of warmth and humour which is perfect for the festive season… As any good panto should do, it delivered on multiple levels. There was silliness and slapstick for the youngest spectators, many enjoying their very first experience of live theatre, while there were clever lines, a little innuendo and plenty of local references to keep the mums, dads and grandparents entertained…” – Berwick Advertiser (The Adventures of Sinbad 2017)

“My children were giggling away and loved joining in the actions, screaming at the stage and admiring the fake snow falling from the ceiling. As far as they were concerned the holidays had started and the party was just beginning” – Berwick Advertiser (Sleeping Beauty 2016)

“The Maltings’ very own Christmas production was very cheeky, but very fun and every child in the audience went away with a smile on their face. As I was leaving, one little boy said: “That was the best thing I’ve ever seen.” – Berwick Advertiser (Little Red Riding Hood 2015)