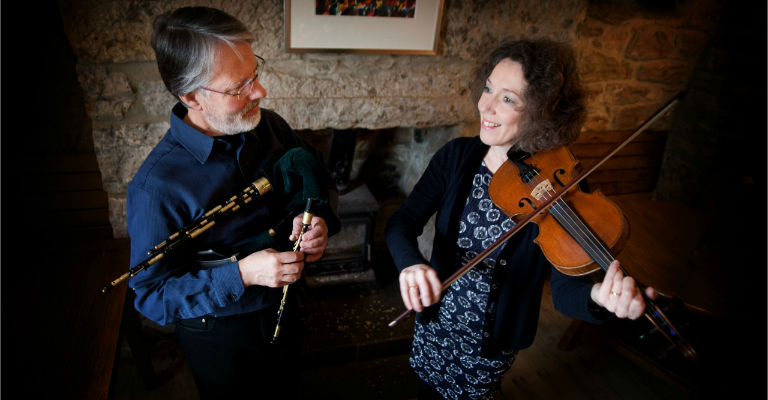 Andy and Margaret have been playing together for well over 30 years. Andy plays Northumbrian smallpipes, Swedish pipes and guitar; as well as singing, Margaret plays fiddle, hummelchen (a small German bagpipe) and nyckelharpa (Swedish keyed fiddle).

“These two play beautifully in unison and when Margaret plays counterpoint to Andrew’s pipes, the sound sparkles.”  EFDSS

“the interplay between fiddle and pipes is tremendous, and demonstrates how both musicians understand each other’s playing. ..  Northumbrian music of the highest quality.”

Whilst their repertoire is predominantly from Northumberland more recently, their numerous visits to Sweden have led to new tunes from Scandinavia being absorbed and included.

Andrew Watchorn: Northumbrian smallpipes, säckpipa (Swedish bagpipe), guitar
After hearing recordings of Joe Hutton, George Atkinson and Billy Pigg and ‘live’ piping at Newcastleton Festival in the mid 1970s Andy decided to make the move from playing the Highland pipes and start learning the smallpipes. Initially self taught, he was then fortunate to learn many tunes playing in the company of Joe Hutton, Will Atkinson and the Cheviot Ranters (to name but a few) in the 1980s and 1990s.

Margaret Watchorn: Fiddle, vocals, hummelchen (Renaissance bagpipe), nyckelharpa (Swedish keyed fiddle).
Margaret grew up in Northumberland amid a rich local and family heritage of tunes, dances, songs and stories. As a teenager, she began playing the smallpipes with Joe Hutton and was a founder member of the Alnwick Pipers’ Society. She studied music at York University and then returned to Northumberland, learning to play the fiddle in the local style and spending endless happy hours with musicians from the older generation. In addition to playing, singing and composing, she researches and writes on the music of rural Northumberland.