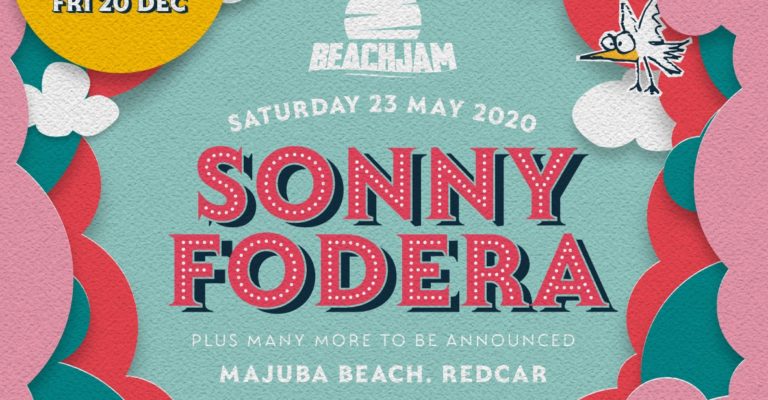 Following on from the announcement that Sonny Fodera was set to headline BeachJam on Bank Holiday Saturday 23rd May, BeachJam are pleased to announce that Hannah Wants, Sam Divine, Joel Corry, DJ SKT and more will join the internationally renowned DJ when they return to the North East shore for Part One of BeachJam 2020 at Majuba Beach!

The revered DJ / Producer & Remixer, who wowed crowds back in August and has recently completed a sold out UK tour for his new album ‘Rise’, will bring his thrilling style of authentic house music back to Majuba Beach on Bank Holiday Saturday 23rd May. A pacesetter in his own right and a citadel of bouncy, assertive grooves, Fodera observes crowds and converses with the dance-floor with an air of someone who has seen it and done it all. As an in-demand producer he has had countless hits released on premiere house music labels ‘Cajual’ & ‘Defected’ all praised by some of the genre’s most established veterans including Cajamere, Derrick Carter right through to the ‘Godfather of house music’ himself; Frankie Knuckles.

Joining Sonny Fodera we welcome special guest Hannah Wants who is without a doubt one of the brightest stars on the electronic music scene with a loyal fanbase – not to mention a super busy DJ dairy that continues to develop and flourish on a worldwide scale. Since winning Mixmag’s Best Breakthrough DJ Award in 2014, Best DJ at the Bass Music Awards in 2015 and an iconic Mixmag cover in 2015 that ended up being the best-selling issue of the entire year, not to mention an Essential Mix the same year as the icing on the proverbial cake. Hannah has quickly risen to the top tier of electronic music, with a slew of tracks signed to the likes of Food, Dirtybird, Toolroom and Virgin, a chart-chomping smash in ‘Rhymes’ and a Radio 1 residency; in 2017 she won the Best DJ Award at the DJ Magazine Best of British Awards, and in May 2018, she stood in for Danny Howard on BBC Radio 1, before launching a new label, a new tour and a brand new concept.

Next up we welcome Sam Divine. Often considered as the Queen of the world renowned Defected Records House music label, Sam Divine is a force to be reckoned with in the DJ world at the minute and continues to go from strength to strength within the industry. With a back catalogue of tracks including her huge remix of ‘I’ll Bring You Flowers’ and her recently released remix of the massive 90’s garage hit ‘Desire’ – she is certain to have everybody in attendance moving throughout her set.

Joel Corry is also set to take to the BeachJam decks on Bank Holiday Saturday 23rd May. After smashing records last summer with the most Shazammed track in one day of his tropical house banger ‘Sorry’, thanks to its appearance in that other summer sensation; Love Island, he quickly rose through the UK charts and has had a relentless DJ schedule ever since.

DJ SKT will also be making a most welcome return to the North East shore after wowing crowds back in August last year. Without question one of the hottest talents in the UK club scene, he is the man behind 2015’s huge ‘Take Me Away’ as well as countless other club anthems. DJ S.K.T is one of the hardest working producers and most in-demand DJs around, and with a new weekly residency on Kiss FM can now count tastemakers such as Annie Mac, Pete Tong, Danny Howard, Mistajam, DJ Target, MK, Roger Sanchez, Amine Edge & Dance and Idris Elba among his legions of fans.

Tickets for BeachJam 2020 Part One are already on sale and with over 60% of tickets already sold for their first event back on the North East coast, organisers are encouraging fans to purchase tickets as early as possible to avoid disappointment.

Tickets can we purchased from www.beachjam.co.uk