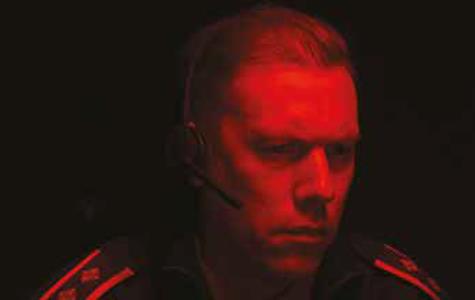 Engage your mind and let loose your imagination to picture the events unfolding outside the police station setting of this riveting and unusual drama.

A demoted officer, restricted to desk work and police dispatching, picks up an urgent appeal from an abducted woman. Seeking to redeem himself but confined to the station, he must rely on others to respond as he attempts to coordinate their interventions, using the only tool he has: a telephone.

With a deft screenplay at its core (and a nod to Locke, screened by BFS in 2015), the skilful solo acting and astute direction ramp up the tension of this smart Danish thriller in its exploration of control and guilt. The result? Minimal ingredients, maximum impact.

“What a flat-out brilliant film this is…a must-see masterclass in cinematic suspense” Cath Clarke, The Guardian