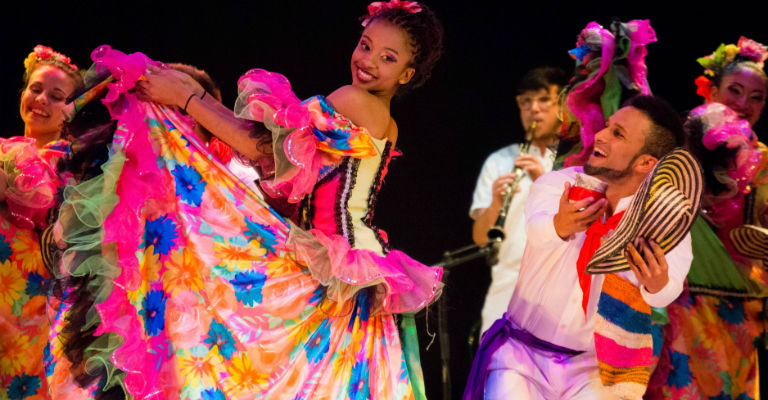 In just under three-week’s time Billingham will be the hotbed of international dance as the world descends on the Tees Valley town for one of the country’s longest running cultural dance festivals.

Between 10th and 18th August Billingham will be totally transformed whilst hosting the 55th Billingham International Folklore Festival of World Dance.

Billingham will open its arms and welcome a host of different countries, who will be showcasing for audiences an eclectic mix of traditional cultures, dances and costumes.

The countries bringing their treasure chest of customs to the region will include Brazil, China, Colombia, Costa Rica, Georgia, Ireland, India, Slovakia, South Korea and the United Kingdom.

There will be an opening and closing ceremony, festival arena shows, an ice-skating spectacular, a special flash mob movement, a night of Indian food and dance, and a host of children’s workshops.

The theme of this year’s Festival is ‘Follow Your Dreams’ with this in mind a large majority of the events are being inspired by one of the world’s leading figure skaters, John Curry OBE, whose work drew inspiration from a combination of ballet and modern dance techniques. He would’ve also been celebrating his seventieth birthday.

The ice-skating spectacular is entitled, The Creative Spirit of John Curry, and will star three of Europe’s hottest ice dancers Mark Hanretty, Vanessa Bauer and Nina Ulanova – all have appeared in the hit television show “Dancing on Ice” alongside Torvill & Dean.

The Billingham International Folklore Festival of World Dance is being supported by Stockton-on-Tees Borough Council and Arts Council England through its National Lottery Project grant.

The festival programme has been devised by Artistic Director Olga Maloney and Balbir Singh of Balbir Singh Dance Company.

The Festival isn’t solely exclusive to the Town as it will be hosting special events in Stockton (ARC Stockton Arts Centre), Middlesbrough (Middlesbrough Town Hall Crypt) and in Darlington (town centre).

Here’s a taster of what traditional and contemporary dances will be wowing the audiences in August? (Visiting Group / Dance type)

Olga Maloney, Artistic Director of Billingham International Folklore Festival of World Dance, said: “The atmosphere in Billingham promises to be magnificent.  The whole town will be transformed by live music, dance, colourful costumes and cultures from around the globe.  We have over 300 volunteers giving up their time to ensure everything runs smoothly.

“The festival has become part of Billingham’s fabric and people look forward to the celebrations year-on-year.  We are now marking fifty-five years of bringing this wonderful event into people’s lives from school children to grandparents and aspiring dancers to tourists visiting the region.  We really do entertain and educate everyone who experiences the occasion.

“The festival is not only respected in England but within international circles Billingham is regarded as a front running destination for delivering world dance to new audiences.  The Creative Spirit of John Curry is a great example of how we are looking to bring dance influences from different areas to make new contemporary pieces, and to have some of the world’s top performers lined up to show off their talent is exciting beyond belief.  We are always proud of the festival’s achievements and never forget where our passion, ambition and dreams are rooted!”

The Creative Spirit of John Curry will enjoy its world premiere performances at Billingham Forum Ice Arena on 16th and 17th August before heading over to Sheffield on 20th August to be staged at iceSheffield.

The festival kicks off on Saturday 10th August with the stunning opening ceremony, when the international dancers will march through Billingham town centre towards the Festival Arena – where people can sample a free taster of what audiences can expect during the festival.