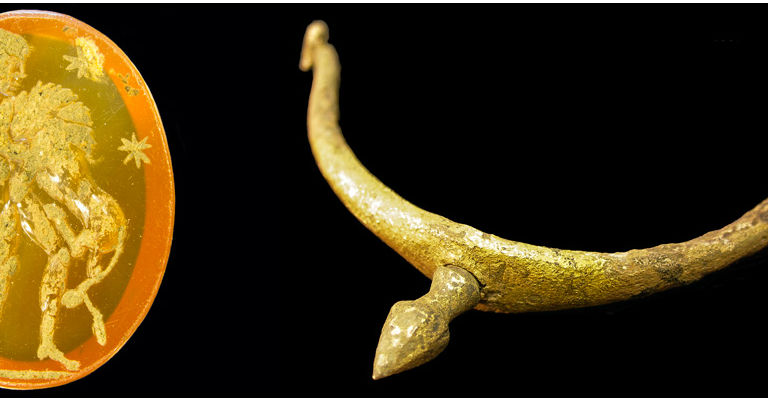 An in-focus display of artefacts found by an archaeological team of around 60 people that have been working along the A1 between Leeming Bar and Barton for three years as part of a Highways England scheme to install an extra lane in each direction and improve the route to motorway standards.

During that time, archaeologists working on behalf of the Carillion Morgan-Sindall Joint Venture have uncovered more than 200,000 prehistoric and Roman artefacts and sieved more than 86 tonnes of sediment samples.

Recent finds include a rare carved gemstone depicting Hercules and the Lion, and coins, as well as two apparently gold plated Roman objects causing great excitement onsite. However, scientific analysis proved that, despite their glittering appearance, in fact the boot spur was brass plated and the brooch bronze plated – a mixture of metals perhaps created intentionally to appear ‘gold’. It is unusual to recover finds with a copper content retaining their original gold/bronze colouring, which is usually lost to a pale green/blue corrosion as the metal deteriorates in the ground. Nevertheless, sometimes the colour is preserved as it would have appeared nearly 2000 years ago, so we can experience them exactly as the Romans would have. You will be able to see them for the first time in their own special case in this display.