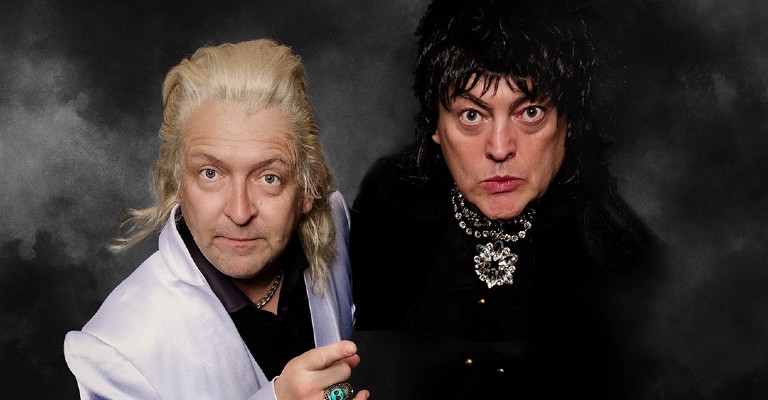 Clinton Baptiste is a character, played by Alex Lowe; a clairvoyant, medium and psychic best known for his appearances in Peter Kay’s Phoenix Nights.

Ramone is the Scottish soothsayer and spirit-channeller from the Caledonian cabaret circuit, played by Lewis Macleod, who features in Clinton Baptiste’s Paranormal Podcast. His expertise in the Dark Arts is surpassed only in the dexterity of his cutting Glaswegian sass.

Their otherworldly skills have rightly attracted audiences all over the world, but now their very public spats are threatening to undermine them. Even the Parapsychological Institute of Great Britain feel that these two silly fakirs are bringing the serious subject of Mediumship into disrepute.

Repeated requests to desist the slander have fallen on deaf ears. Both claims to be the one true mystical seer. The show will be a battle of charisma, verbal one up-man ship and hair-raising paranormal wizardry as the two megastars meet to finally decide who holds the title as Britain’s Greatest Paranormalist.

Alex Lowe is an actor and comedian known also as the creator and voice behind the character “Barry from Watford” on Steve Wright’s BBC Radio 2 show and Talkradio’s Iain Lee show. He has since featured on Clare in the Community, The Thick of It and This Time with Alan Partridge. Lewis Mcleod is a comedian and actor, known for his work across TV, radio and commercials such as Dead Ringers and Jeremy Vine: Agony Uncle.

Theatre Director Joanne Johnson said, “Clinton was such a hit with audiences when he visited us earlier this year with his show ‘Clinton Baptiste Goes Stratospheric’; it was a no-brainer to have him back next November for this brand-new show- with podcast favourite Ramone in tow!”