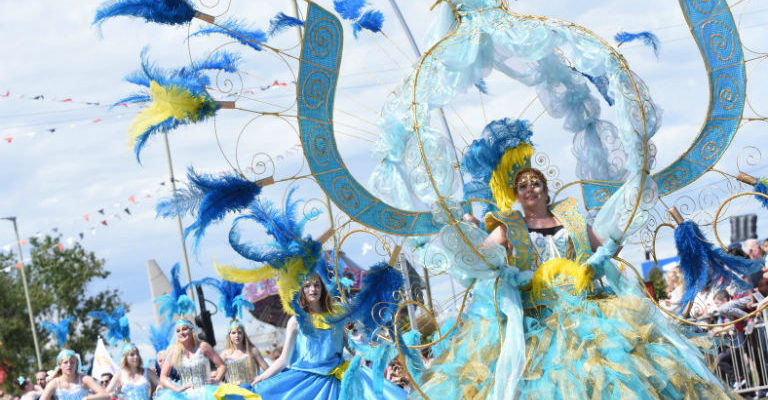 COMMUNITY groups, schools and other voluntary organisations are being invited to don their costumes and take part in one of the summer’s most exciting events.

The annual Summer Parade is one of the key events in the South Tyneside Festival, which is organised by South Tyneside Council, and brings three months of music and family entertainment to venues across South Shields.

This year’s theme will be Monsters, Myths and Magic, and organisers are hoping to involve hundreds of youth groups, schools and community organisations.

Working under the artistic direction of South Shields-based Creative Seed, these groups will get the chance to join the parade on Saturday 30 June.

The parade is expected to involve fantastic floats, colourful costumes, singing and dancing, as it weaves its way through the town centre from South Shields Town Hall to Bents Park.

And now anyone wanting to get involved can get a flavour of the event at a special preview on Friday 23 March.

Garner Harris, director at Creative Seed, is calling on groups to get involved.

“The Summer Parade is a fantastic event, and this is a great opportunity for people to come together in a big celebration,” he said. “We want to involve as many people as possible from across South Tyneside and beyond.

“Each year the parade gets bigger and better, and we are working on some exciting ideas to make this year’s even more special.

“We will be hosting a ‘visioning’ event with group leaders and interested parties next week so they can come along and really see how they can get involved this time round.

“But even if someone is not part of a specific group, there’s still no reason not to be involved as we want everyone from toddlers to grandparents to be included.”

Cllr Alan Kerr, Deputy Leader of South Tyneside Council with responsibility for culture and leisure, added: “The annual parade is one of the favourite events on South Tyneside’s calendar and we are keen to help grow it even more.

“We want to make the parade a big celebration, featuring as many people as we possibly can. The team at Creative Seed has some incredible plans and ideas, and I am looking forward to seeing the result of all their hard work this summer.”

As part of the preparations for this year’s event, Garner and Sandy Harris of Creative Seed will be meeting school, community and voluntary group leaders at The Word, National Centre for the Written Word, at Market Place from 5.30pm on Friday 23 March.

Any groups that cannot attend the meeting but are interested in taking part in the parade are advised to contact the events team at South Tyneside Council on 0191 424 7986 or email events@southtyneside.gov.uk