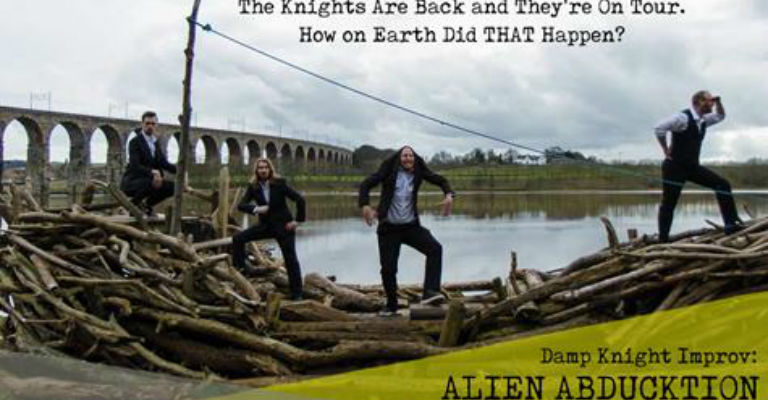 The Damp Knight Boys are back in town for more rib-tickling comedy!

Damp Knight Improv are in town bringing you a ludicrous show that will have you rolling in the aisles with laughter at their signature brand of insane improvised comedy, which takes elements of “Whose Line Is It Anyway?”, “Fast and Loose” and “Mock the Week”, coupled with audience suggestions and a complete lack of preparation time to produce a performance you won’t forget in a hurry.

Join Damp Knight Improv in their latest comedy special, Alien Abducktion, as they invent and scramble their way through an evening of impossible scenes, ridiculous gameshows and even the odd inconceivable musical number, all to provide an evening’s entertainment for you, their audience.

For those who like to laugh or just scream the odd verb when prompted, it is a night that should not be missed.

Who are the Damp Knights?
Formed in 2015, creative comedy crowd ‘The Damp Knights’ are a group of talented (they promise it’s true!) actors, performers and general miscreants that know how to make audiences laugh, but have no idea how to write a script. After 4 sell-out performances at The Maltings Theatre in Berwick upon Tweed, they are now taking their quick wits, stage chemistry and lack of shame on the road.

Their previous shows; President Rhino, A Knightmare on Elk Street, Turtle Recall & Trial by Wombat, have highlights on their YouTube channel, which also showcases their ever-improving sketch writing capabilities – CLICK HERE to check it out.

You can also listen to their free podcast HERE.