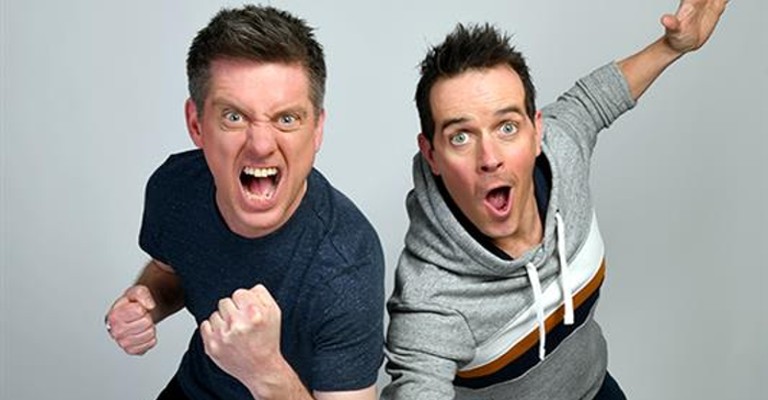 Starting on Thursday 22nd September at Newcastle’s Tyne Theatre, the show is set to excite Bungalow Heads young and old who spent every Saturday morning glued to the TV set watching the boys command the chaos.

The live show promises to bring back the spirit of Da Bungalow with their family friendly anarchic style and content as it was in the original series.  This interactive experience will include all your favourite games including two-word tango, musical splatues, the grunty song, fairly hairy fizzogs, pants dance, what a sweaty flap and of course bogies!!!  And for their finale expect to watch participants being splattered in their legendary Creamy Muck Muck game. There will be appearances from Diddy, Dick and Dom, and D.I Harry Batt with his interrogation game as well as giving  audience members the chance to win part of, some of, or almost all the price of their ticket…

“20 years?! 20 years since those lift doors slid open and we welcomed you to Da Bungalow! It’s going to blow your mind as we take you on a nostalgia fuelled trip to

relive the best show ever to be on your telly! The most asked question we get is, ‘When are you going to bring Da Bungalow Back’. Well… it’s BACK! See you there. P.S BOOOOGIES!” DICK & DOM

‘Dick and Dom in Da Bungalow’ started on CBBC on August 31st, 2002. After one series, the audience had grown from one kid eating her cereal in Stockport, to hundreds of thousands of fanatical viewers screaming ‘bogies’ at the top of their lungs.

The show swiftly moved to BBC One, putting Saturday mornings back on the BBC’s map and thrashing the opposition ‘SMTV Live’. Over 4 years, 5 hit series and numerous awards and accolades Dick and Dom became household names. Despite being asked to continue for another 2 series the team made the decision to end the series on a high in 2006.

The show has many celebrity fans and participants (or victims!) of the show including Fearne Cotton, Adam Woodyatt, Chris Moyles, Tom Fletcher, Sara Cox, Will Mellor, Rupert Grint and of course Rachel Stevens (who famously legged it as she didn’t want to get dirty!).

After 25 years together Dick and Dom’s success is still as relevant today as it was back in ‘Da Bungalow’. In 2017, they completed a nationwide smash theatre tour, followed in 2018 by a sell-out season in one of the largest venues at the Edinburgh Festival, winning them an award for Best Family Show. Audiences of families and those old enough to remember the original still flock to see them proving the Bungalow’s heritage still lives on and continues to ignite the millennial generation.

Dick and Dom are Richard “Dick” McCourt and Dominic “Dom” Wood. As well as In Da Bungaliow, they have presented The Sunday Morning Show on BBC Radio 1 and ‘Are You Smarter than a 10 Year Old?’ for  Sky 1 as well as starring roles in the hit film ‘Horrid Henry: The Movie’. Their many other hit TV shows include ‘The Legend of Dick & Dom’, Diddy Movies and Diddy TV, Splatalot, Dick & Dom’s HOOPLA and the BAFTA award winning ‘Absolute Genius With Dick and Dom’.  Recent TV appearances include Comic Relief, The Weakest Link, Pointless and Celebrity Ghost Trip.

The pair voiced the roles of Unhygienix and Fulliautomatix in the English release of the film Asterix: The Mansions of the Gods.  They also starred in the hit film ‘Horrid Henry: The Movie‘. On stage Dick and Dom played King Arthur and Patsy in Monty Python’s West End revival of Spamalot.