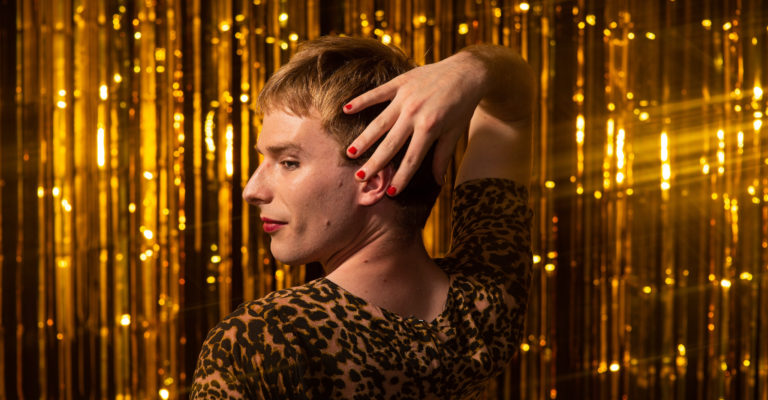 Theatre Makers Matt Miller and Peader Kirk have come together to co-create a solo theatre performance, FITTING, drawing on spoken-word storytelling, autobiographical accounts and physical theatre to explore themes of identity and belonging.

Following on from a successful Autumn tour, FITTING has commenced a Spring tour which will play the Queen’s Hall Arts Centre, Hexham, on 25 and 26 March at 7.30pm.

Magic is everywhere. Wear a dress and people treat you one way. Try a pinstripe suit and, abracadabra, it’s like you’re a different person. If they say beauty is just skin deep, then why is appearance so important to the way we are treated? FITTING is a solo theatre show about Matt’s adventures in dresses and suits with some magic tricks up its sleeve. From interactions with strangers at bus stops to transgressive explorations in charity shops, follow Matt as they navigate and explode the ground between gender binaries.

Alongside the show, two wrap-around participation activities have been developed – Conversation Café and Versions of You – designed to allow the public to engage with the questions which the show asks and to open a gentle, fun and supported dialogue about where they feel they fit.

Matt Miller is a poet and theatre maker who writes about place, identity and ways of belonging. They learned their craft with Nottingham based poetry collective The Mouthy Poets. In 2014, Matt was selected as one of BBC Radio Three’s Verb New Voices. Matt has been an artist in residence at Alphabetti Theatre and was one of Live Theatre’s inaugural Live Lab Artists. In 2018/19 Matt worked with The Mighty Creatives as a workshop facilitator. Matt has been praised for their ‘powers of urban storytelling’ (Ian McMillan, The Verb).

Peader Kirk is an Artist and Director working internationally in the fields of Performance and Sound Art. He makes work that engages directly with communities to ask questions about how we meet amidst difference and how we create change. His work has recently been shown at The Southbank Centre and The Institute of Contemporary Arts in London, The National Theatre of Greece in Athens, Academy of Fine Arts in Turin and The Hong Kong Repertory Theatre. Peader trained as a director with Robert Lepage at the National Theatre, London and with Eugenio Barba at CPR, Wales.

Matt started working with Peader in 2016. Their first solo show together, STICKING performed to sold out audiences and was toured to Contact Manchester, Gala Theatre, as part of the Durham Book Festival, ARC Stockton and Alphabetti Theatre. They now return with the next in the series exploring LGBTQ+ topics questioning existing perceptions of non-binary gender.