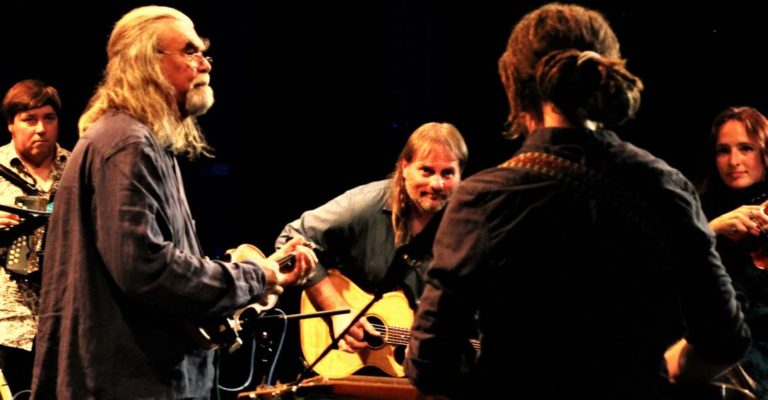 Periodically, the bringing together of influential musicians, all with their own unique identity, produces an electrifying force that is even greater than the impressive sum of its parts.

As a trio, Gigspanner, formed by fiddle player Peter Knight (ex-Steeleye Span), has established a reputation as one of the most genuinely ground-breaking forces on the British folk scene, inspiring Maverick magazine to write “Gigspanner are pushing at the boundaries, expanding the possibilities and in the process making some of the most beautiful music the genre has to offer” 5*****

And as if that collaboration wasn’t exciting enough in itself, enter John Spiers, co-founder of Bellowhead and one half of the magical duo Spiers and Boden, and most recently, Knight and Spiers.

Their appearances together, with Roger Flack on guitar and Sacha Trochet on hand percussion, are a rare, but highly sought after affair, thanks to performances of dazzling musicianship and arresting on stage chemistry.

Taking self-penned material along with music rooted in the British Isles and beyond, with the flick of a bow, a finely chosen chord or slip of a beat, they produce richly atmospheric arrangements layered within a wealth of subliminal musical influences “with notes seemingly plucked from the stars and rhythms from the equator” Spiral Earth.