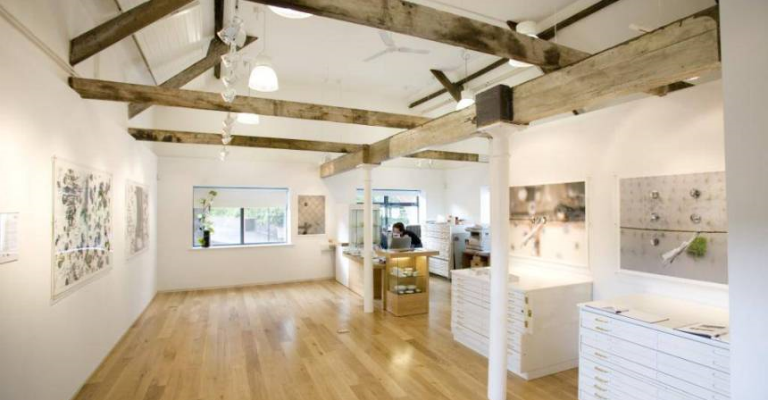 All day during opening hours

The works of printmakers Katherine Jones and Anja Percival are brought together for this wintertime exhibition as they share an atmospheric treatment of light, often with a domestic context.

Both artists create powerfully evocative prints that invite the viewer to be the sole beneficiary of the dreamlike ambience, being that both Jones and Percival choose to omit the human form from their work.

Katherine Jones is a fine art printmaker and painter. She was brought up in Herefordshire and now lives and works in Brixton South London. She combines traditional forms of intaglio and relief print namely etching, collagraph and block-print to produce her distinctive images.

The tension between safety and danger, security and vulnerability, have been a central focus of the work which has traditionally centred around a recurring house motif. This was used to convey feelings of protection and safety associated with domestic buildings alongside suggestions of vulnerability, airlessness and overprotection. These archetypal forms are then subverted both structurally and contextually making them seem at once solid, frail and peculiar. In a recent series of work, the archetypal playground is used as a vehicle for describing these contrasting themes – manipulating impressions of those familiar objects specifically made for the process of childhood play and experiment.

Katherine is the current artist in residence at Rabley Drawing Centre, Whiltshire and is the recipient of numerous awards, including the London Original Print Fair Prize at the Royal Academy Summer Exhibition in 2014 and The Printmaking Today prize at the Royal Society of Painter Printmakers 2014.

Her work is held at the V&A prints and drawings collection, The V&A National Art library, Yale University Library, the House of Lords and in public collections worldwide.

Anja Percival is a full time printmaker and runs her own printmaking studio in Fowlers Yard, Durham City.  Upon returning to the North East after a 5 year period of working in Denmark, Anja was awarded ‘Printmaker of the Year’ at Printfest 2010 and went on to secure gallery representation nationally and internationally, with outlets including London, New York, Denmark, Sweden and Canada.

In September 2012, Anja held a solo exhibition in the Galilee Chapel of Durham Cathedral, and that same year her work was selected to hang in the newly refurbished Millbank House, within the House of Lords.

Anja’s first solo show at Fowlers Yard in 2014 was part of that year’s International Print Biennale and in the autumn of 2015 her work was selected to participate in the New Light Prize Exhibition at Panter & Hall in London, along with 15 other artists, chosen from over 2000 submissions.

‘I am fascinated by the different atmospheres that light creates in our environment. My etchings are hand-drawn, created by working directly onto the copper plate with a wax pencil. I rarely start with line, but instead focus on the highlights within an image, using techniques that build on the areas that will remain light, instead of building up the image with dark line and shading. My colour palette is relatively subdued; I feel that strong colour would detract the attention from the subtle tonal variations within the imagery, and I frequently focus on spaces that do not include the human figure; because to me, a human presence signifies movement, and this would interfere with the stillness of the composition. My choice of subject matter is usually quite ordinary (e.g. the inside of my own home, or the scenery I pass daily on the way the work) but it’s the effect that light has within these spaces that captures my attention. I find it really interesting to see light transforming the unremarkable to the remarkable, revealing a whole new level of visual stimuli.’