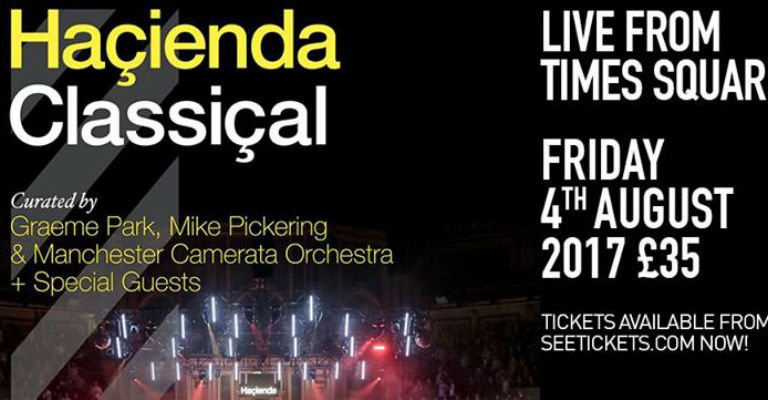 After a spellbinding tour throughout the UK, The Haçienda and Manchester Camerata – the city’s experimental orchestra – are bringing back Haçienda Classical in 2017 with a brand new soundtrack in what will be their first Newcastle appearance on Friday 4th August.

Speaking ahead of the Haçienda Classical showdown, DJ Graeme Park – infamous for his role in the acid house revolution that was born in Manchester’s most famous nightclub, the Haçienda – explains:

“Back in the late 80s when the Haçienda explosion occurred, there was no other non commercial clubs for people to go to. People would travel far and wide to be there. It touched the lives of so many people and we’re delighted to have created a whole new version of it where we can take the whole experience on the road with us. British Hip Hop, EDM and Acid House scene still has its place in the world and it’s amazing to see that there’s a new generation of clubbers who want to experience it.

“You’re going to hear 20 euphoric tracks that will bring smiles to people faces and will make the hairs on the back of your next stand up. If you haven’t seen us before you would have experienced nothing like it.

“I’ve been to Newcastle lots of times with stints at places like the World Headquarters nightclub and the legendary club night, Shindig. I’ve been playing in the North East since the late 80s and you guys know how to party! August is also my birthday month, so this one will be extra special for me”

Described as the best rave since the Haçienda closed its doors in 1997, the spectacle will feature the DJs who shaped The Haçienda’s sound – Mike Pickering and Graeme Park – who will collaborate with the Camerata for a night of classic dance music, adapted and arranged especially for the occasion.

Commenting on its inspiration, Graeme adds: “Like all good ideas, Haçienda Classical was formed in a bar. We wanted to come up with something that still made the Haçienda relevant and new but when hotel guests started coming into the bar for breakfast and we hadn’t come up with anything, we knew we had to get a move on!

“We were just about to call it a night when the lift opened and two guys came out carrying classic musical instruments. We joked we should do a classical Haçienda show. We all looked at each other laughing and suddenly it clicked. Yeah, that’s the one! So in January 2015 we came up with the idea and Haçienda Classical was born. We’ve never looked back.

“Everyone has completely embraced it and taken into their hearts. Both young and old. This crazy idea formed in a hotel bar has turned out to be one of the greatest things we’ve ever done.”

Tickets for the Live From Times Square events are sale now. Tickets for Haçienda Classical are priced at £35.