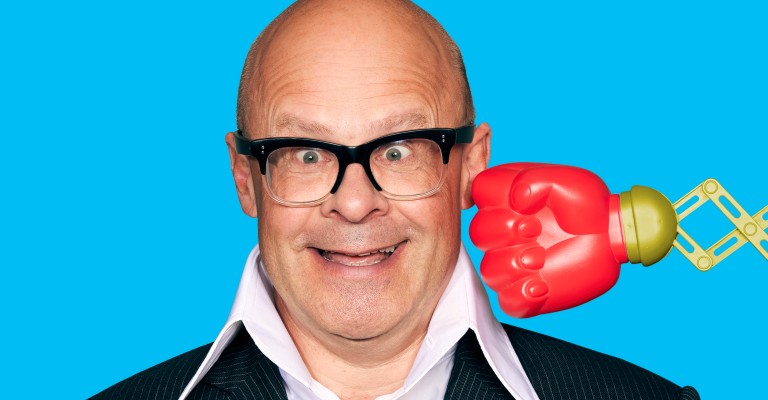 Following the phenomenal success of his critically acclaimed tour Sausage Time back in 2013, Harry is making a highly anticipated return, with brand-new jokes in an all-singing, all-dancing one-man spectacular.

Audiences will meet Harry’s new baby elephant, Sarah, and Ian, The Information Worm.
Harry will also be joined by Stouffer the Cat (his famous sidekick) who commented “what can I tell you? When Harry calls you say yes – end of!”

Harry Hill made his debut as a comedian at the Edinburgh Fringe Festival, where he won the Perrier award for Best Newcomer in 1992. Over the course of his career (30 years and counting), Harry has earned himself three BAFTAs and eight British Comedy Awards, making him one of Britain’s most respected and cherished comedians.

Harry has written and starred in several successful radio shows, as well as TV series for BBC Two and Channel 4, before going on to create the hugely successful ITV series Harry Hill’s TV Burp which gathered a cult following over its 10-year run. More recently he has created three series of ITV’s Harry Hill’s Alien Fun Capsule, two series of Harry Hill’s Tea-Time and Harry Hill’s World of TV. He is also the long-time narrator of You’ve Been Framed!

Harry is also a successful author, and has written a number of bestselling joke books, childrens stories, and just published an autobiography, Fight!: Thirty Years Not Quite At The Top.

Harry Hill says, “I hadn’t realised how much I missed performing live until lockdown stopped me from doing it,” says Harry, “It’s great to be going back on stage and the good news is I am planning a very silly show.”

Tickets are on sale now and are priced £31:
https://bit.ly/TThill