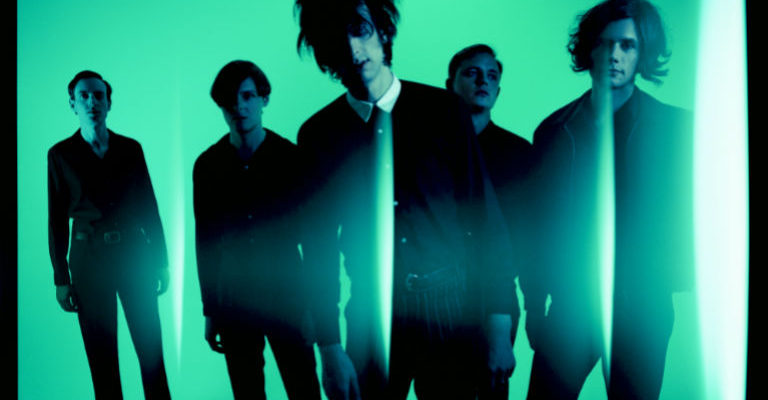 Hit the North Weekend Tickets can be purchased for £50.00.

THE HORRORS have been revealed as the first headliner for Hit The North Festival 2018 who will head to Newcastle on Sunday 6 May. The event, now in its second year, will return once again taking in 15 venues in the city centre.

Returning in 2017 with the astonishing V, their fifth studio album, The Horrors are stronger than ever and primed to take on Hit the North.

Met with critical acclaim, V received 5 out of 5 star reviews from The Guardian who praised The Horrors for creating a piece of unique counter-culture whilst retaining a commercially viable sound.

The album is a culmination of The Horrors multitude of influences, from shoe gaze, to industrial 80’s synth callings; the fifth offering from the band has cemented them as headliners for a new generation.

As well as new material, The Horrors bring with them hits such as ‘Still Life’ and ‘Sea Within A Sea’ from the head of the hype that surrounded them in the early 2000’s. Always guaranteed to inject a level of weird into proceedings, The Horrors dark silhouettes can be found delivering daggers of fragmented sound late night at Hit The North this year.
Also topping the bill are alternative rockers MARMOZETS, who return to the North East after a stellar Sell Out show at Riverside, Newcastle in early 2018. Marmozets have seen some rough times, but they’ve battled against the hardships as a family to come out on the other side one of the UK alternative scene’s brightest hopes.
After signing to Roadrunner Records in October 2013, the band (Rebecca ‘Becca’ Macintyre (vocals), Jack Bottomley (guitar), Sam Macintyre (guitar/vocals) Will Bottomley (bass/vocals) and Josh Macintyre (drums)) went onto release their debut album The Weird and Wonderful Marmozets in 2014.

Despite a four year wait for fans, Marmozets’ second album Knowing What You Know Now was released in January 2018. The return has been praised as a progression in style for the band.  Embracing a new side in ‘euphoric pop and dance breakdowns’ whilst maintaining their rock sound. The album is celebrated as being a huge step forward in the career of a band who almost didn’t make it to their second album.
Bedford born TOM GRENNAN makes his triumphant return to Hit The North Festival after an extremely successful year which sees him rise even further up the bill.
First gaining attention for his featuring vocal on Chase & Status track ‘When It All Goes Wrong’, Tom is now a fully-fledged recording artist in his own right. Grennan released his debut EP, ‘Something in the Water,’ in 2016, featuring tracks produced by Charlie Hugall (Florence + the Machine, Ed Sheeran, Kaiser Chiefs). 2017 saw another successful EP drop from the young star; ‘Release The Breaks’ peaked at number 24 in the iTunes music charts.
The signer-songwriter is due to release his first full-length album in May this year and has so far teased fans with new material in ‘Sober’ which deals with his relationship with alcohol. With his March tour dates almost completely sold out, Tom Grennan is on a non-stop rocket to the top.

Another huge name finding themselves on top in Hit the North’s first wave of announcements are the enigmatic BRITISH SEA POWER. The Brighton-based sextet originally hail from Kendal in Cumbria and are renowned for their conceptual output which brings together elements of art-rock and post-rock experimentalism.

Their 2017 release Let Dancers Inherit The Party shone a beacon of light into an otherwise gloomy year. Celebrated for it’s abundant escapism and eighties romanticism, their sixth studio album is full of uplifting emotionality and stargazing euphoria. The record was funded in part by a crowdfunding campaign to enable its release, and was recorded in multiple locations, including Clapham, Lympne Castle, Skye, and the band’s native Brighton.

Priding itself on showcasing the next big things in music, Hit The North’s 2018 line-up boasts a multitude of new and emerging acts including BBC Introducing Ones To Watch, PALE WAVES.

Manchester based indie-pop stars Pale Waves have taken the UK by storm selling out shows up and down the country, including a sold out show at Middlesbrough’s Westgarth Social Club earlier this year. The band are due to release their debut EP ‘All The Things I Never Said’ on 16th March. Pale Waves have used their famous friends to hone their sound with The 1975’s Matt Healey heavily involved in their production and the direction of the music video for ‘Television Romance’ released late 2017.

Another keen eyed booking on the part of Hit the North Festival are firm favourites from last year, THE MAGIC GANG. Joining them on their second round at HTN are local indie-rock heavy weights THE PALE WHITE, who opened up the main stage at 2017’s inaugural event.

Speaking on today’s announcement, Festival Promoter Steve Davis has expressed his excitement for 2018’s festival: “We’re thrilled to release the line up to the public and celebrate our second year of Hit the North.

“We have high hopes for the event and this years line up shows a great progression from 2017.”

The focus for Hit the North is on new music, whether that’s from established bands with new releases, or from brand new artists just stepping out into the world. This will be the second edition of the festival which runs from 4-6 May across 15 Newcastle venues. It will feature over 120 artists.

UPDATE: Another day, Another Special Guest! Scotland’s Finest Glasvegas will perform Riverside Newcastle as part of this weekend’s Hit The North Festival.

The legendary indie rock band from Glasgow famed for songs such as Daddy’s Gone, Flowers and Football Tops and Geraldine will perform on the banks of the Tyne for the Meet the North leg of the event this Saturday 5th May.