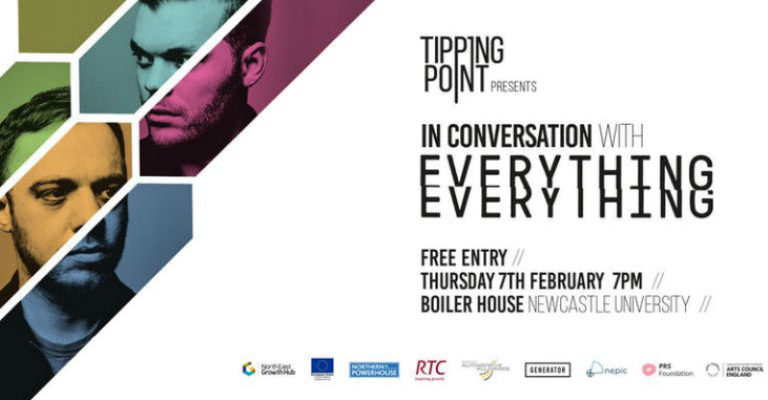 Taking place at The Boiler House – presented in collaboration with the International Centre for Music Studies at Newcastle University – in the heart of Newcastle University’s Campus, on Thursday 7th February from 7 pm, the band has promised to reveal and discuss the magic behind their four critically acclaimed albums – which includes three top tens – and the secrets behind the band’s on-going global reputation and creative processes.

Having formed in Manchester in 2007, half of the band’s members hail from the North East and lead vocalist Jonathan Higgs, from Gilsland, near Hexham, is looking forward to returning home and providing a fascinating and candid insight into Everything Everything’s career and international fame.

“Coming from the North-East, I’ve always had a strong connection to Newcastle and Northumberland,” explains Higgs.

“It will be my pleasure to be back and get involved in the conversation again, and I’m looking forward to being in one of my favourite cities!”

Everything Everything bassist, Jeremy Pritchard, continues: “The band played some of its most significant and memorable early shows in Newcastle at the end of the 2000s.

“So it’s a real honour to come to chat to North East emerging artists and songwriters about a decade of making music together.

“I dare say we have as much to learn from them as they do from us!”

Tipping Point, who will host In Conversation with Everything Everything in February, offers a range of free support services for creative people who want to develop their potential and explore career pathways in the music industry.

It has big plans for 2019 and will use the forthcoming event in Newcastle as a high-profile springboard for its soon to be unveiled programme of masterclasses, courses and workshops, showcases, mentoring, single releases and distribution deals.

Talent Development Manager, Charlie Dancer, adds: “Welcoming Jon and Jeremy to the North East to talk about their creative development as a band is a big win for us and the region. They have a globally recognised ability to write great songs and have never taken part in this kind of conversation about their work before – this is a UK first!

“Everything Everything are one of the UK’s most relevant bands of the last decade and this event represents what 2019 is all about for Tipping Point; quality over quantity and making sure in every area we operate this year we smash it out the park. This is just the beginning for us.

“The event is for songwriters of any age with a level of interest in challenging their creative styles and self-development.”