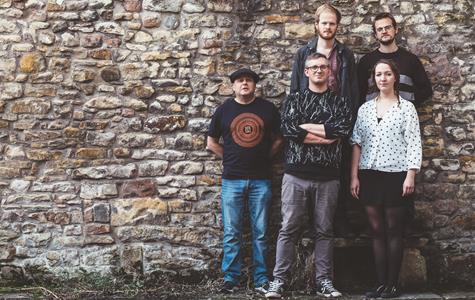 The John Pope Quintet is a free-wheeling modern jazz band made up of some of the most exciting, well-regarded improvisers in the North of England.
Lead by hard working bass player and composer John Pope, this chord-less lineup features musicians equally adept at structured, tightly arranged ensemble playing and wide open exploration. Their music draws on a deep love for 60s avant-jazz, hard bop, American and European free jazz, alternative rock and the endless opportunities of live performance, played with a sensibility informed by the adventurous sounds of today’s UK scene and an open, celebratory attitude. They have brought their joyful racket to stages across the UK, including slots at Gateshead and Lancaster jazz festivals.

Based in Newcastle, John Pope has played with artists from all across the spectrum of modern music, from free improv legends to folk-scene stalwarts to at least one genuine pop star. But jazz remains his creative home turf. Originally formed in 2016 to perform the music of Ornette Coleman for a Jazz North East anniversary celebration, the Quintet quickly became a vehicle for John’s work as a composer. Today the music they make reflects the diversity and width of all those influences, referencing a lifetime’s immersion in jazz, rock, improvisation and groove-driven music through the acoustic framework of classic free-jazz. Ornette Coleman of course remains a huge touchstone, as does the work of bass-player/composers like William Parker, Charlie Haden and the great Charles Mingus, not to mention countless other influences. It all adds up to a life-affirming noise full of rewards for the adventurous listener.