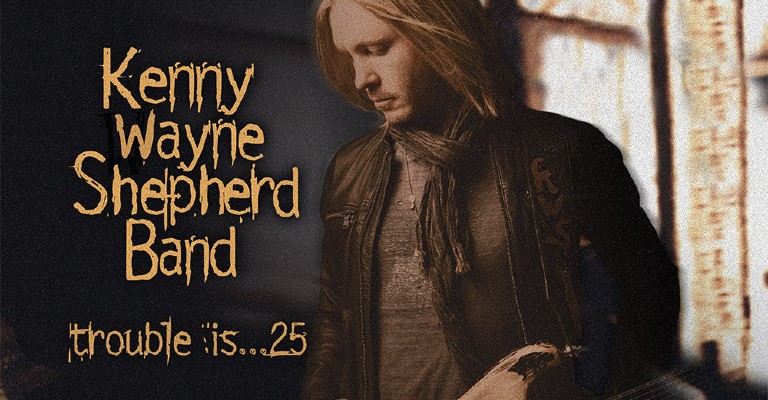 “One of the coolest things about re-recording ‘Trouble Is…’ has been finding out – or verifying – how timeless this album really is,” says Shepherd, who is also leading a triumphant anniversary tour performing the album in full. “I’m so proud of what we accomplished, and also the fact I was just 18 years old when I did it. I mean, I had an experience with this album that most musicians can only dream about. ‘Trouble Is…’ sold millions of copies. There’s validation in all of that for me.”

There are few artists whose names are synonymous with one instrument and how it’s played in service to an entire genre.

Utter the phrase, “young blues rock guitarist,” within earshot of anyone with even a cursory knowledge of the modern musical vanguard and the first name they are most likely to respond with will be Kenny Wayne Shepherd. The Louisiana born axeman and songsmith has sold millions of albums and thrown singles into the Top 10 while shining a light on the rich blues of the past and forging ahead with his own modern twist on a classic sound that he has embodied since his teens.

In a 20-year recording career that began when he was just 16, Shepherd has established himself as an immensely popular recording artist, a consistently in-demand live act, and an influential force in a worldwide resurgence of interest in the blues.

From television performances on The Tonight Show with Jay Leno, The Late Show with David Letterman, Jimmy Kimmel Live, and Late Night with Jimmy Fallon (amongst others) to features in Rolling Stone, Vanity Fair, Maxim Magazine, Blender, Spin, USA Today, and more, Shepherd’s musical career has been nothing short of phenomenal.

Theatre Director Jo Johnson said: “We get lots of brilliant music acts through our doors and we’re thrilled to add Kenny Wayne Shepherd to that list. With such an incredible career and unbelievable talent we know that audiences for Kenny’s show won’t be disappointed.”

Note that this is a rescheduled show and 20th April 2023 is the new date.

Tickets are priced at £45 – £30 and can be bought at: https://www.tynetheatreandoperahouse.uk/events/kenny-wayne-shepherd-band/

Please note that this show is 14+