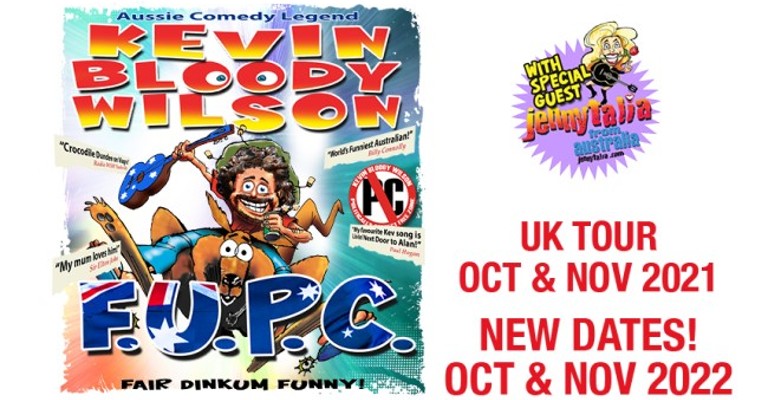 Kevin Bloody Wilson first emerged in the early eighties, earning himself a bold reputation for his bawdy, politically incorrect songs, performed to the people of Perth.  The songs were originally written and recorded on a homemade cassette tape for his friends, simply songs penned about his experiences living in the Outback. An electrician by day in the gold mines in Kalgoorlie, Western Australia, Kevin pursued music by night. The success and interest in his initial cassette skyrocketed to the tens of thousands before being transferred to vinyl, where sales continued to soar.

Today, he is one of Australia’s most famous (or perhaps infamous!) comedians. Over his career, the comedian has released more than 20 albums, selling over four million copies across the globe. Hits such as “D.I.L.L.I.G.A.F” and “Living Next Door to Alan”, have racked up millions of streams on Spotify – his non-PC Bawdy Ballads are said to contain an infectious singalong quality that stays with you forever.

Next November, Kevin brings his ‘F.U.P.C World Tour’ to the Tyne Theatre & Opera House. The show is filled with brand-new songs bound to have his audiences in stitches, from the opening track, “F.U.P.C”, to his unique take on the worldwide #MeToo movement in his new fan singalong, “DIY Me Too!”. Just like “Dick’taphone”, “Hey Santa Claus” and “Living Next Door to Alan”, these newly crafted songs are guaranteed to become “Kev Klassics”.

Labeled by 60 Minutes as Australian Comedy Icon and defender of free speech, Kev’s Master Craftsmanship and world-wide popularity, is further proof that Kevin Bloody Wilson is the sole owner of an entire genre of music, The Contemporary Bawdy Ballad. If you’re looking for a testimonial look no further than Billy Connolly, who described his Aussie Mate as “The world’s funniest Australian”.

Theatre Director Joanne Johnson says: “It will have been over two years since Kevin Bloody Wilson’s last tour, fans will understandably be very excited for his new show. We’re also looking forward to welcoming him back to our stage, alongside his daughter, and we’re confident that the audience will have a great laugh!”
Tickets are priced £30.00 and will be available to book from Friday 29th October 10am: bit.ly/TTkevinbwilson