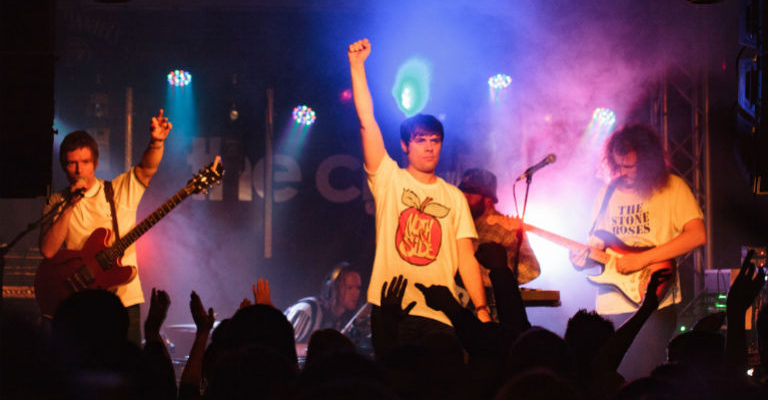 The sights and sounds of the 1990s are set to return to Newcastle this festive season as the UK’s number one Britpop band take to the stage with a little help from Manchester icons Oasis.

Taking place at the newly launched live music venue Jumpin’ Jacks (above The Dog and Parrot) opposite the Centre for Life, the five-piece Britpop tribute, The National Anthems, will headline and host a Christmas spectacular on Friday December 22 featuring a full screening of Oasis’ legendary 1996 concert performance at Knebworth.

Following the group’s debut sell-out show at The Cluny in September – which saw indie legend Tom Hingley of Inspiral Carpets support – the band will now turn their attention to an intimate Newcastle date in honour of their home crowd for an evening of high octane 90s nostalgia.

The National Anthems, who have just signed to a new national agent to oversee major national dates in 2018, have said they want to perform a special show for their fellow Geordies before turning their attention to a UK wide tour in the New Year.

Riding high on the success of 1995’s (What’s The Story) Morning Glory, and a year before they would puncture the bubble with the overblown Be Here Now in 1997, Oasis played a career defining concert at Knebworth in Hertfordshire in front of 250,000 people which found the band at the peak of their powers.

And, in a true tribute, the UK’s leading Britpop band, The National Anthems, will screen the entire concert in full – a UK first – before heading onto the stage to deliver their set.

Speaking about the forthcoming show, National Anthems guitarist, David Welsh, formerly of the celebrated Newcastle band Detroit Social Club – who were the last band to support Oasis before they broke up  in 2009 – said: “Two-and-a-half million people applied for tickets for that Knebworth show and they were the concerts that defined an era.

“We’ve been given access to the extremely rare footage from that show and can’t wait to screen it in full and in front of a live audience for the very first time before we deliver our best set yet. If you were at Knebworth now’s your chance to re-live it, and if you weren’t, we will be going all out to bring back the atmosphere and the fist-punching electricity of those two amazing days.

“We were blown away by the crowd and the response we got at our Cluny debut show and we can’t wait to bring back the 90s once again on one the maddest Christmas nights of the year, Black Eye Friday. This show will sell out, so make sure you get in quick.”

Based on Tyneside, The National Anthems are made up of a collective of Newcastle based musicians who have created a new dedicated band to represent an era of music which has witnessed a wave of nostalgia in recent times.

Taking their musical cues from the likes of 90s legendary acts such as Oasis, Blur, Pulp The Stone Roses and The Verve, The National Anthems have made it their mission to produce an authentic and electrifying Britpop infused experience like no other.

Tickets for The National Anthems’ Christmas Special at Jumpin’ Jacks (above The Dog and Parrot) are on sale now priced at just £10.00.